Barringer began her career as a Coast Guard reservist in 2000. It was not long before she decided to switch over to active duty. After completing “A” School, Barringer graduated as a gunner’s mate third class.

She spent many years building her career as a gunner’s mate at Small Arms Repair Facility Indiana, Coast Guard Cutters Tahoma and Rush, and Sector Honolulu. 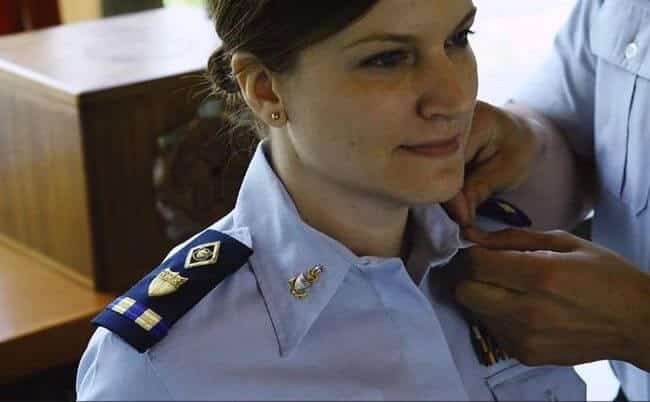 In 2010, the maritime enforcement specialist (ME) rating was announced and Barringer knew she wanted to make the switch. She was selected to lateral over to ME and shipped off to “A” School for a second time, this time as a chief. She graduated ME “A” School and went on to become the assistant school chief of ME “A” School where she helped develop curriculum.

“I started applying to become a chief warrant officer when I found out I was making chief,” said Barringer. “I applied nine times before I was picked up.

Barringer said she always knew she wanted to become a warrant officer because she had worked for great warrant officers throughout her career who inspired her. She became discouraged year after year of not being selected but said she had a great group of people who have supported her along the way.

“I’m happy that women have really great opportunities in the Coast Guard,” said Barringer. “I think the Coast Guard works a little bit harder at breaking stigmas and trying to be inclusive. It’s definitely a place where I feel like I can integrate as part of a team with no issue. I feel as though I’ve always been valued and appreciated.”

Barringer has devoted 19 years of her life to the Coast Guard and plans to continue serving for many more years. She is scheduled to begin a new position in the National Command Center in Washington, D.C. this summer.

“The people have really made it worthwhile,” said Barringer. “The work, of course, is extremely rewarding. To this day, I’m just as passionate and happy about the missions as I was back when I graduated from Cape May 19 years ago.

*Chief Warrant Officer Carolann Mullins was the first female reservist to make the rank of MLES2 while on extended active duty orders in 2010 when the rate was created. Bravo-Zulu to both women for their groundbreaking accomplishments.