As the UK and Ireland’s leading supplier of aids to navigation, Hydrosphere is always looking for innovative and high-quality products to bring to the marine market. We first came across the Mara Buoy at Tarbert in Scotland and knew it would sit perfectly within, and be a progressive new addition to, Hydrosphere’s existing portfolio.

The story behind Mara Buoy

The Mara Buoy was developed by a keen yachtsman and engineer looking for a new solution to the age-old problem of picking up a mooring. Typically, this means having to hang over the side of the boat, using a hook to try to recover the mooring and drag the ‘junk’ aboard. If this has been lying in the water for some time, it can be covered in seaweed, slime and other marine growth – making it unpleasant to handle and messy on deck.

But the Mara Buoy takes a different approach. Frustrated with existing designs, the engineers re-designed the traditional buoy from the chain up – giving users a safe, easy and reliable deck-level mooring system which enables them to pick up the rope by hand and moor straight onto the line coming out the top of the buoy. 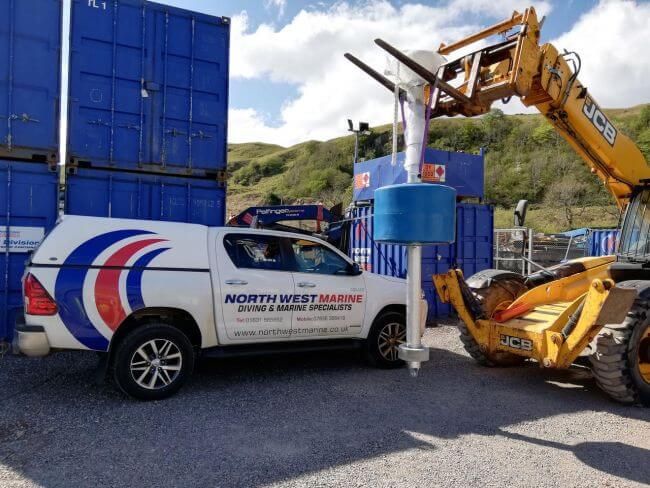 Equally, for those installing and inspecting the moorings, maintenance is also reduced – while the lack of a pick-up buoy and any trailing ‘junk’ means they can potentially place moorings closer together, allowing more moorings to be installed.

For those looking to save money on Marina berth costs, the Mara buoy is a very cost-effective way to maximise the use of the boat on a mooring.

There are four products in the Mara Buoy range. With the two Static models, the mooring line is terminated in a high-strength polymer eye, which the person simply picks up, passes their own line through and then secures on board. The Mara Buoy Dynamic models uniquely pay out slack line upon initial pick up – making it easy for the person to reach out, pick up, and fasten the mooring line to the deck cleat before the mooring load comes on the system.

The buoys have been under development for about three years now – with the latest addition to the range, the 10:75 S, introduced towards the end of April 2019. Engineered to be lower cost than the other buoys in the range, the 10:75 S has a 10-tonne breaking load and stands approximately 75 cm clear of the water. Initially, we saw the Mara Buoy sitting at the large end of the domestic market or the smaller end of the commercial business but the new 10:75 S allows us to target smaller boats with lower freeboards and multiple moorings at marinas, as well as mooring associations.

Whereas Hydrosphere has handled the supply, sales and distribution of the Mara Buoy, North West Marine has been responsible for the mooring chain, installation and maintenance. Based in Oban, North West Marine is a marine installation and maintenance company which services a large percentage of boat moorings off the west coast of Scotland. The company recently purchased a Mara Buoy 15:150 Dynamic on behalf of one of its customers and this particular buoy is now going into Dunstaffnage Marina just outside Oban.

These types of buoys are very unique to the yachting world. Many people won’t have seen it before or even know that mooring can be carried out in this way, but more people are now becoming aware of the Mara Buoy and are very positive about it as a product. The 10:75 S, in particular, is likely to see mass market adoption in the near future.

Hydrosphere is firmly established as the UK and Ireland’s leading supplier of aids to navigation – providing high-quality, reliable and cost-effective solutions to the marine industry.