Computers recognise patterns in large data volumes much faster than people. Significant efficiency steps can also be taken in the maritime sector regarding big data and artificial intelligence. For instance, this technology is enabling the arrival times of vessels in sea and inland ports to be predicted earlier and with increased precision. 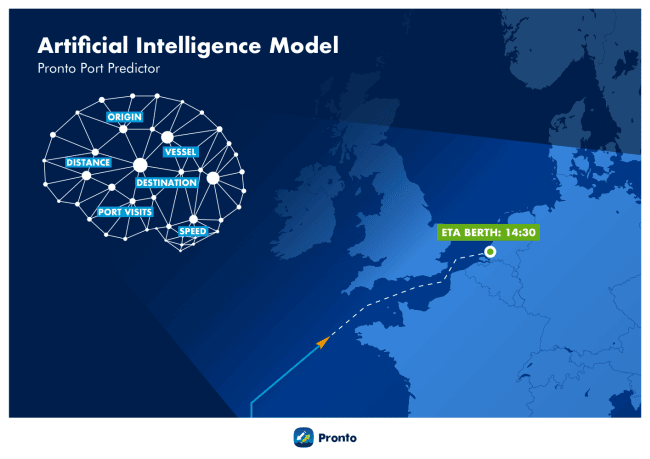 Had anybody heard of Alibaba five years ago? And yet, the Chinese e-commerce giant is now well on the way to achieving a billion customers worldwide. On 11 November 2018, Alibaba made a billion euro in turnover in just 85 seconds. Mainly known in the past for its copycat behaviour, these days China is at the forefront in the development of artificial intelligence and other trendsetting technologies. According to Alibaba founder Jack Ma, data rather than oil is the fuel of the future. More technology is also becoming available to generate and share that data. It is expected that over 11 billion devices will be connected with the internet by 2021. While the volume of data is increasing exponentially, data analysis costs are falling rapidly.

Computers use the sea of data that we produce these days for self-training. The Port of Rotterdam is also investing in this development with Pronto, an application for standardised data exchange on port calls. Almost half of shipping companies, agents, terminals and other nautical service providers in the port use the system to plan, implement and monitor their activities during a port call. Pronto uses artificial intelligence to predict vessel arrival times in the port. ‘Various factors influence a vessel’s arrival time’, stated Arjen Leege, Senior Data Scientist at the Port of Rotterdam Authority. ‘This includes the vessel type and cargo type, as well as the location, route, sailing speed and movements of other vessels in the vicinity. We have mapped out the most crucial parameters. During this process we sometimes dropped parameters or added new ones. For instance, it emerged that the number of times a vessel has already entered the Port of Rotterdam is also relevant.’

Data sources include AIS and the Port Authority databases, including vessel arrival times at the loading platform. Port Authority data scientists used the parameters to develop a self-learning computer model. Initially, this was fed with some 12,000 items of historical data. The computer recognised patterns in these, enabling it to learn to predict how much time a vessel needs to move from the loading platform to the berth. ‘Computers can make complex connections must faster than people’, explained Leege. ‘That is actually the power of artificial intelligence. A computer’s predictive capacity increases when it is fed continuously with up-to-date data. We can now predict with 20-minute precision when arriving vessels will reach the berth. The computer can also look further into the future and calculate the arrival times of vessels that are still some seven days away from the Port of Rotterdam. By looking further ahead, we will ultimately be able to predict a vessel’s entire route. Perhaps even some 30 days in advance, including multiple ports.’

Leege continued: ‘The more details we know at an earlier stage, the better we can plan our resources. If you know it will be busy in the port you can, for instance, increase the towage capacity in advance by requesting tugboats from another port to call at Rotterdam. Pronto can now also identify which vessels are bunkered, piloted or towed in the port. Possibly there will be new applications in the future that we’ve not considered as yet. That is what’s great about this development.’

Using artificial intelligence has already reduced vessel waiting times in the Port of Rotterdam by 20 per cent. Robbert Engels, Product Lead Port Call Optimisation, sees further optimisation potential. ‘The more parties share data and work actively with the information they receive from the system, the more transparent the chain will become, the better we will be at taking decisions and the better we will be able to manage planning deviations. It is still up to users themselves to interpret all the various times contained in Pronto, but in future, the computer may be able to help with this. The higher the data volumes, the more you can do. It goes without saying that there has been a strong focus on data security. Cyber security has been integrated into the system. We do not use any privacy-sensitive data.’

As well as optimism, there is scepticism regarding artificial intelligence. In practice, self-learning robots sometimes cause problems. Google Assistant learned to swear because it was fed data by people who swore. Amazon pulled the plug on a job application robot that discriminated against women. ‘Amazon appointed mainly men over the past ten years’, stated Leege. ‘The computer recognised this pattern in the datasets and simply continued it. Predictions are always complex and a computer can get it wrong. However, with Pronto we’ve not gone for a black box approach. We gave a lot of thought to the factors that determine the distance a vessel covers. We’ve provided the computer with reliable parameters for its predictions. In theory we can even show per prediction how this came about.’