First container ship at the new ICAVE terminal – Naming ceremony held during the 500th anniversary of the Mexican city and port. Hamburg Süd christened the “Polar Mexico” container ship in the Mexican port of Veracruz on the weekend. The sponsor of the “Polar Mexico” is Claudia Dávila, wife of Carlos Ayala, Logistics and Distribution Director of Alpek Polyester, which is a subsidiary of the Alfa Group, one of the largest corporate groups in Mexico. 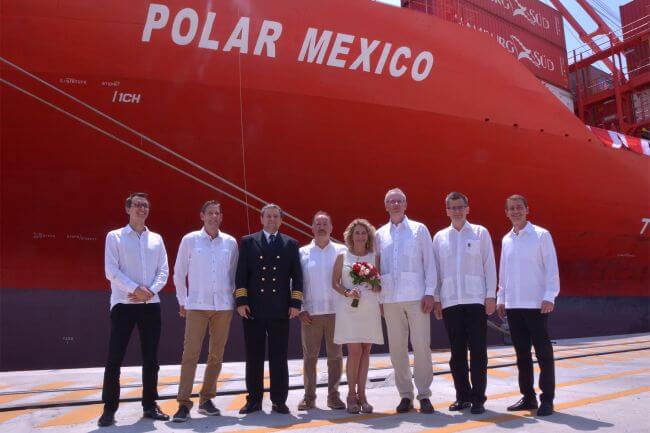 “Mexico is one of the most important economies in Latin America and an important market for Hamburg Süd,” says Arnt Vespermann, CEO of Hamburg Süd. “We are proud that we are christening this vessel while the city and the port of Veracruz are celebrating their 500th anniversary.” The Mexican economy is strong in the fruit sector as well as in other industries with high import and export volumes, such as automobile manufacturing, chemicals and brewing. “As a global carrier we are serving the Mexican market with a set of very competitive connections to almost all other continents,” he says.

Hamburg Süd has been active in Mexico for approximately 50 years and is one of the three largest liner shipping companies in the Mexican market today. One of the most important Hamburg Süd liner services for the region is the North Europe – Mexico/Caribbean Service (EMCS), which connects Altamira, Veracruz and Progreso as well as further Caribbean ports with Ireland, Great Britain, Antwerp and Bremerhaven. The “Polar Mexico” is also deployed in this service. Other Hamburg Süd services are also calling the Mexican ports of Manzanillo and Lázaro Cárdenas.

The ship belongs to a group of four structurally identical vessels in the “Polar” class that have been built for Hamburg Süd by the Chinese shipyard Jiangsu New Yangzi Shipbuilding. With a total length of 230 meters and a width of 37.30 meters, the ship offers a container storage capacity of 3,800 TEU. Due to its size, design and a large number of reefer connections (1,000 plugs), the “Polar Mexico” is particularly tailored to transport refrigerated cargo.

The christening of the “Polar Mexico” also marked first berthing of a container vessel at the new ICAVE terminal, major maritime infrastructure development in the port of Veracruz, which is scheduled to start operations soon.