The naming ceremony has been held for two custom tugs built by Damen Shipyards Hardinxveld for De Boer Remorquage SARL, a joint venture between Dutch Dredging and Iskes Towage and Salvage.

The ceremony took place in the port of Cayenne in French Guyana. Both vessels represent innovative solutions and one of them has additional modifications that enable it to undertake dredging and other associated activities.

The Reverse Stern Drive (RSD) WID Tug 2915 Hybrid Fregate is a unique harbour tug that has been designed to provide a single vessel that is a fully-functional tug with 42.5 tonnes of bollard pull but is also fitted with a Water Injection Dredging (WID) system that enables it to maintain the depths of the harbours of Cayenne and Kourou in French Guyana. 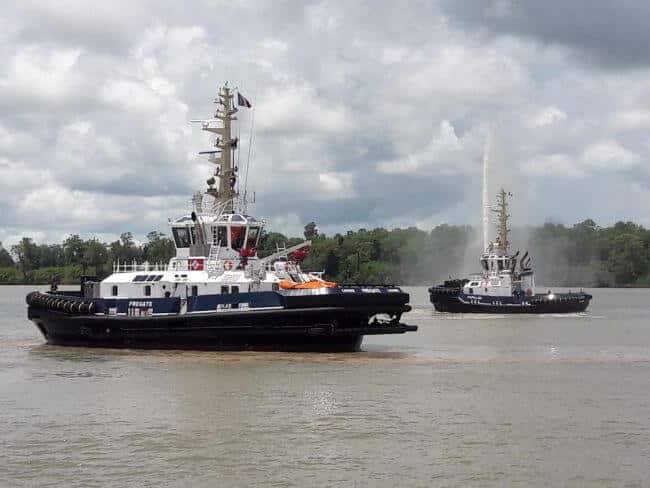 Present at the event where representatives from a number of French government agencies and the port authorities, plus guests from De Boer, Dutch Dredging, Iskes Towage & Salvage and Damen. Sarah Ringuet, as Miss Kourou 2018, christened the ASD Tug 2310 SD (shallow draft) Papillon and Ms. Ruth Briquet, as Miss Guyane 2018, did the same for the RSD WID Tug 2915 Fregate.

The reason for the unusual design arose from the specific requirements of the contracting port authority GPM-Guyane, which manages the ports. It recognised that specialist tugs and dredgers could not be kept fully occupied at its locations and so in its 2016 renewal tender it specified that designs be submitted that combined both attributes in two separate vessels, one of which became the RSD WID Tug 2915 Hybrid.

To achieve this Dutch Dredging, which had been working with GPM-Guyane for 15 years, teamed up with tug experts Iskes Towage & Salvage to form De Boer Remorquage SARL. In cooperation with Damen and GPM-Guyane, the various parties contributed their specialist knowledge to the process of designing the RSD WID Tug 2915 so as to ensure that it could successfully undertake its multi-role purpose, which includes fire-fighting (Fi-Fi1) and equipment transportation alongside dredging and vessel handling.

WID is a relatively new dredging technique that is particularly suited to smaller, tidal harbours. It works by fluidising the sediment layer using water jets and injecting air to bring the sediments to the surface where the air can escape and the sediment flow horizontally out of the harbour or channel using natural processes and forces. This removes the need for the physical extraction and transportation of the sediment and so causes much less disruption to traffic using the ports.

Working alongside the Frigate, is the Papillon, the second vessel that formed part of the tender. The smaller ASD 2310 SD (Shallow Draft) tug Papillon was also delivered by Damen Shipyards Hardinxveld. This is another modified design, having been fitted out with the equipment for surveying activities.

For nearly all vessel types Damen offers a broad range of services, including maintenance, spare parts delivery, training and the transfer of (shipbuilding) know-how. Damen also offers a variety of marine components, such as nozzles, rudders, winches, anchors, anchor chains and steel works.

Damen Shiprepair & Conversion (DSC) has a worldwide network of eighteen repair and conversion yards of which twelve are located in North West Europe. Facilities at the yards include more than 50 floating and (covered) drydocks, the largest of which is 420 x 90 metres, as well as slopes, ship lifts and indoor halls.

Projects range from the smallest simple repairs through Class’ maintenance to complex refits and the complete conversion of large offshore structures. DSC completes around 1,300 repair and maintenance jobs annually, both at yards as well as in ports and during voyages.