You are here: Home › Marine Ports › Port of Hamburg: The Largest Seaport in Germany
TwitterFacebookLinkedInPinterestBuffer

The Port of Hamburg is an internationally well-known and an important seaport of Germany. According to ranking statistics with respect to container capacity, the port is placed first in the whole of Germany, second in the whole of Europe and 11th amongst the other ports of the world.

The port forges an important water network to the pivotal North Sea by the River Elbe. Extending to a geographic area of 7,250 hectares, the Hamburg Port has a total berthing capacity of 320 and can be utilised for any and every kind of cargo vessel. 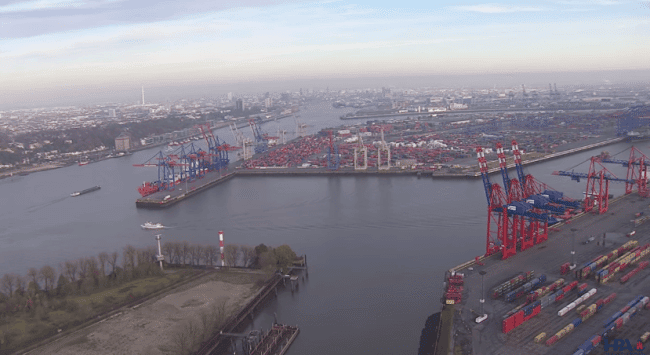 Operated under the management of the HPA – Hamburg Port Authority, the major terminal operator is the HHLA group which has three terminals under its line of operations out of the four terminals:

The fourth terminal in the port of Hamburg is the Eurogate terminal. Having an area of over a million square metres, the terminal has a six berth container berthing capacity and forms a part of the operations of the conglomerate Eurogate.

Apart from these terminals for container vessels, the port of Hamburg has an addition of couple of cruise ship terminals – HafenCity and Altona. The port also caters to bulk cargo and dry cargo ships and its terminal statistics for these ships in transit is placed at 42. The port has a very good demarcating system for dry cargo vessels and bulk cargo vessels which adds to the systematic operations of the Hamburg port.

The Hamburg port is a vital cog in the shipping operations of Germany. Placed very conveniently in terms of geography, the Port of Hamburg forms a major link between the Eastern and Central parts of the Continent and accounts for 25% of the interior shipping activities of the country.

Port Of Hamburg’s Throughput Shows Signs Of Turnaround; Decline Of 8% In Q3, 2020

What Does “Port of Call” Means?
Megamax-24 Class Giant ‘HMM Hamburg’ Makes Its First Call In Port Of Hamburg
Watch: New Leading Light Line On The Elbe – Port of Hamburg