A very common question regarding ships has been – if they can brake to stop like any other automobile or aeroplane on ground. The answer, as we all know, is “NO”, and that is not what this article focuses on. The article delves into the reasons behind the answer- Why cannot a ship brake itself to stop? And if it cannot, how do ships stop at all?

To understand the answer behind this question we first need to know how a brake works? The working principle of a brake is that it creates friction between the wheel and a stationary body (generally the brake shoe) to stop the rotatory motion of the wheel, with respect to the surface with which the wheel is in contact.

Here’s a video on how car brakes work:

Extrapolate this concept to a moving ship – there are no wheels in this case, given the fact that a ship propels itself in water by a propeller that is located at its stern. Now when a propeller rotates, it generates a thrust which propels the ship in the forward direction. The most vital thing to note here is that the hull of the ship moves in a fluid medium and hence it is not possible to instantly bring a ship to stop, given the shearing tendency of water medium.

Hence, a ship can be braked, but not by using a conventional braking system. It uses various methods, sometimes applied individually, and sometimes combined with each other, to brake and maintain station (geographic position)

When a ship moves in water, there is a viscous drag generated between the submerged hull surface and water particles in contact with the hull. This drag is generated due to the viscosity of water, and is directly proportional to the wetted surface area of the ship, and varies to the square of velocity of the ship (expression below):

The primary aim of braking any moving object, is to increase the drag force experienced by the body. Therefore in case of a ship, according to the above formula, the drag force should be increased (in other words, the ship should brake) by:

– Increasing the velocity of the ship: Though theoretically, this would increase the resistance, and with a velocity tending to infinity, the resistance should tend to an infinite value. In other words, theoretically, the ship should come to rest at an infinite surge velocity, which is practically not possible, and is hence a paradox. The secret lies in looking at the problem from the correct angle. 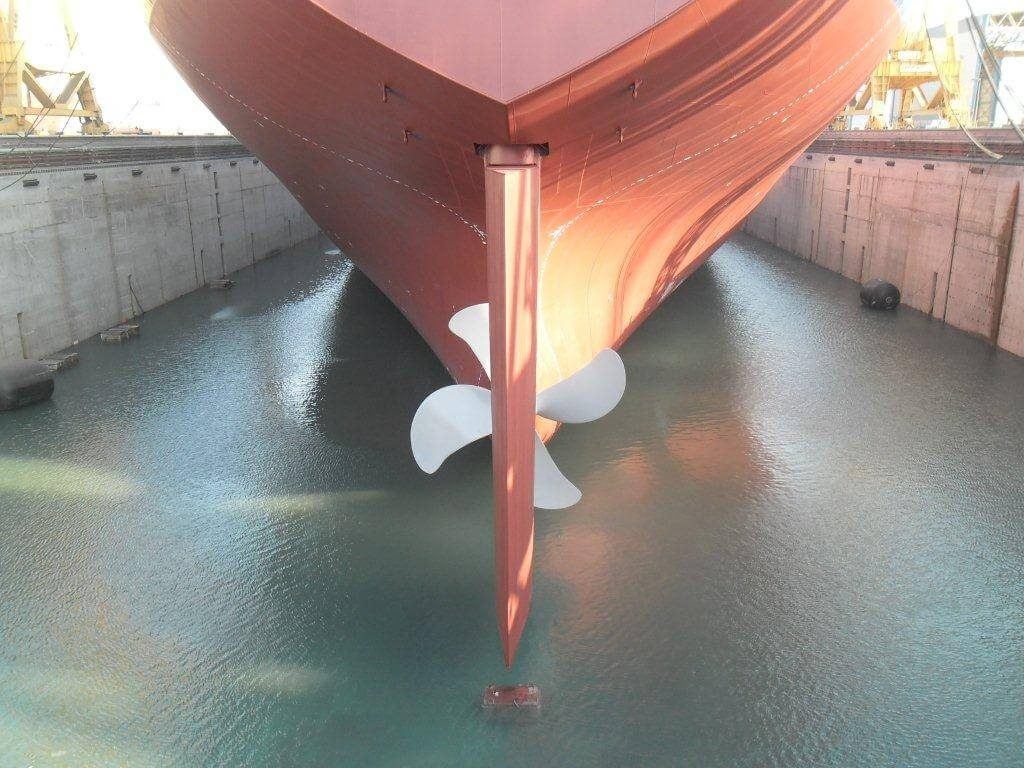 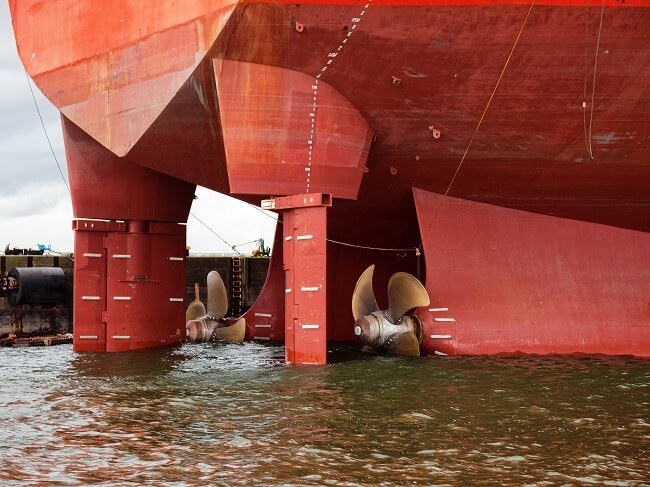 The important parameters of breaking to be considered by a ship designer are measured during a crash stop test, which is carried out for every ship during sea trials.

The purpose of the crash stop test is to estimate the braking parameters of the ship, and record them so as to provide a database to the ship crew.

The test is carried out at the design speed, and the ship is surged on a straight path and allowed to surge with negligible acceleration for some time until it attains a steady motion in the desired path. The path of the ship is tracked by using the GPS system installed on the vessel. Once the engine is powered to the rated RPM, the direction of rotation of the engine is reversed in one go. The distance covered bt the ship before coming to complete stop is calculated by the GPS system, and is recorded as the track length of the ship.

The track length of a ship is very important as in, it helps the captain to estimate the time and distance required to bring the ship to a complete stop in case of emergencies.

Figure 1: Path of midpoint of the ship during a crash stop test

Hence, what can be concluded from the above explained theories is that a ship is a sluggish body, and therefore it has a certain lag of response to the action carried out to bring about any change in its motion. Ships are not braked conventionally, rather, cannot be braked conventionally primarily because of the medium in which it moves.

Having understood the physics behind the stopping of a ship, it’s also useful to understand how a ship maintains station. When at heavy seas, it uses Dynamic Positioning System, which is a networked system of sensors, computers, thrusters and propellers to help the ship maintain a steady position depending on the disturbance forces from the sea. When at harbour or port, station is maintained by mooring lines that tether the ship to the berths.

Some ships in certain cases can also use anchors as a braking mechanism, but it would only help in reduction of speed, and is not as abrupt as that of crash stop method.