You are here: Home › Naval Architecture › What Is Advanced Outfitting in Shipbuilding?
TwitterFacebookLinkedInPinterestBuffer

In conventional shipbuilding, the ship’s hull structure is fabricated and erected on the berth or dock and the outfitting is started only after launching the hull from the berth. As a result, it has been found that the process of first fabricating and completing the hull structure followed by outfitting the hull after launching takes longer time. Hence, to reduce the cycle time and improve the productivity of the shipyards, the concept of advanced outfitting has been developed.

All the modern day shipyards across the world have now identified that by adopting the concept of advance outfitting the vessel building cycle time can be reduced and a substantial saving of costs, along with other benefits, depending on the availability of infrastructure in the yards can be achieved. Different concepts have been developed for the completion of outfitting in block stage to derive the benefits of this methods. In case you might not understand what “block-stage” means, read on as we discuss the key concepts of advanced outfitting technology.

Even before the hull block is made, the outfit components (machinery, piping, seating structures, etc.) which are supposed to be located in a particular small area in the ship are fully assembled into a small unit and when the hull block is made, this unit is then directly installed at the required position in the block. Hence you see, in this process, the steel structure and the machinery outfit units are developed simultaneously instead of a traditional process wherein the machinery and outfit are installed only after complete erection of the ship’s hull. This process actually helps in reducing the cycle time required to build the ship. Remember, in ship-building too, time is money. 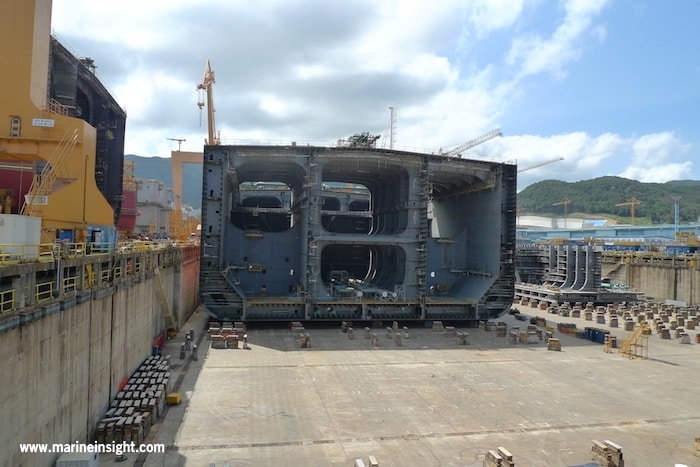 Block outfitting involves erection of units of assembled components (a component may be a unit of a pump with its seating and associated piping) and also heavy machinery (for example: boilers) on large blocks of the hull before the blocks are erected and welded to each other. However, consideration is always given to the limitation of the total weight that can be handled by the carnage facilities of the yard. The size of the hull blocks are accordingly pre-decided by the design department of the yard, keeping this factor in mind.

Also, open-sky access for erection of machinery, makes it easier for the production department to erect larger machinery.

The terms above may sound new and complicated but they are one of the most fundamental and interesting strategies used in the modern shipbuilding industry. The basic principle of Group Technology is that it involves identifying the subdivisions of a product, which although may not be necessarily identical are produced by the same process and set of operations.

Let’s make it clear for you with an example. In the engine room area of a ship, a unit can be considered as a machinery component along with its seat and connected piping. The kind of work required to erect such a unit, will be similar to that required to erect many similar units in the engine room area. Therefore, Group Technology involves identification of the interim products or so called units, which can be handled by the same type of processes.

The application of Group Technology to ship-building results in dividing entire ship into sub-divisions based on the kind of work required to build and erect each division. Each division can now be assigned to different manufacturing groups who are specialised to build those particular units effectively.

Such categorisation of the components required to build the ship is known as Product Work Breakdown Structure (PWBS). Now, each type of component is to be manufactured in separate and specialised locations in the shipyard called workstations.

The question arises as to why do we need such a grouping? The answer lies in the fact that this method of grouping offers considerable potential for the improvement of the manufacturing efficiency of the shipyard. Because each workstation is now specialized in efficiently manufacturing its designated units, since it is equipped with the suitable tools, machinery and workforce required for the same. This not only allows easier planning of work but also maintains a steady work load with increased performance of operators.

One very notable aspect that we must take note of is that this method can now be applicable to develop and manufacture the interim products of units for all types of ships that the yard will be building in the future. Thus, the advantage of repeated work can be obtained in utilising the workstation concept in shipbuilding industry.

Before we start understanding this concept of advanced outfitting, it is necessary to understand what a “Zone” is when we are speaking in terms of shipbuilding. A zone may correspond to a compartment or even any integral part of a compartment of a ship, such as a cargo hold or a machinery space and its sub-divisions. It completely depends on the yard as to how they define the zones in a ship to be built. Even an entire superstructure or just one level (deck) of a superstructure could be considered to be a zone. Hence, in a nutshell, a zone is a sub-division of a ship that is selected for the convenience of outfitting either on units of hull block or on larger hull blocks or directly on-board the whole ship after all the blocks are joined.

There are three types of zone outfitting practices, mainly dependent on the scale on which it is applied. 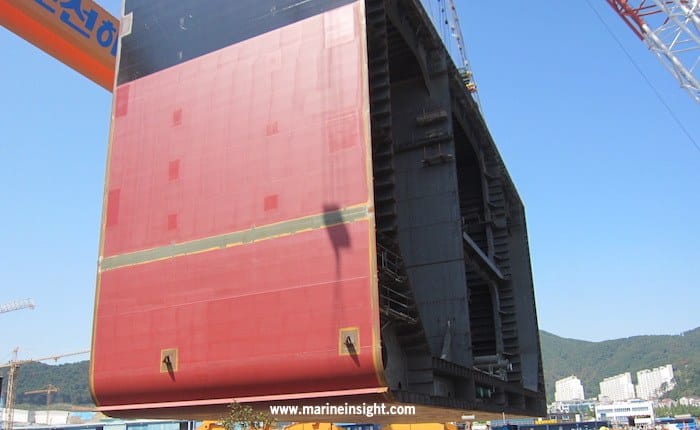 It is important to note that the decision of sequencing the outfit process according to the size of the outfit components, machinery and the associated zone of the hull structure is a very crucial aspect of the decision making process of the production planning department of the yard.

Other zones of outfitting include accommodation blocks, stern blocks, etc. which are separately manufactured in specialised areas of the yard (or by contractors) and then erected onto the hull structure as single units.

By now, you must have had a clear image and idea of what advanced outfitting actually is, what are the concepts applied behind this production strategy, the reasons behind each, and how each and every concept is carried out practically in any shipyard. Each of these concepts have been developed after years of experience from success and failures over a range of shipbuilding projects undertaken by major and minor shipyards across the globe.

But the deeper story behind this technology is more than what has been discussed in this article. We must understand what advantages have the shipyards benefitted from, on implementing this strategy in shipbuilding. Why are newer shipyards slowly adopting advanced outfitting and changing tracks from traditional shipbuilding methods? Moreover, another vital question that can be raised is what kind of infrastructure is required by shipyards to enable the proper functioning of advanced outfitting? It is these issues that we will be dealing with, in the coming two parts of this series of articles on advanced outfitting.