The International Association of Classification Societies, (IACS), UK in 2014, launched a project that would investigate into the structural design rules required to be complied by solid bulk carriers and oil tankers.

Previously, the structures of bulk carriers and oil tankers used to be designed according to the rules of the respective classification societies. But over the years, there was felt a need to develop a uniform set of structural rules that could be used by designers irrespective of the concerned classifying society.

Hence, two separate research teams were deployed for collection of statistical data that could help model the load scenarios at sea, and this information would later help in formulation of empirical methods to estimate the safe structural parameters. Two teams- one for bulk carriers and the other for oil tankers. But later, it was suggested by the industry that a unified set of rules for both the ships was more preferable, which was when the decision to formulate Common Structural Rules for Bulk Carriers and Oil Tankers was taken.

The IACS Common Structural Rules were formulated only for bulk carriers and oil tankers, and not for ships of any other kind. To be more precise, they are applicable only for double hull oil tankers. The ships on which these rules should be applied, must be self propelled and ply on waters that are freely navigable without any restriction.

Also, during the formulation of these rules, it has been assumed that the design ship has a double bottom, and that the engine room is located aft of the cargo tanks or hold region.

For Common Structural Rules, though applicable for bulk carriers, it is very important to remember that these are meant to be applied on bulk carriers that exceed a length of 90 meters, and can be single skinned or double skinned.

The following ships, though are classified as bulk carriers by designers, need not be designed in compliance to Common Structural Rules:

In the above ships discussed, where CSR compliance is not required, they are to be designed by the rules of the authorising classification society.

In case of oil tankers, Harmonised CSR is applicable to ships that have length more than 150 meters. There are a set of midship sections, varying according to the arrangement of longitudinal bulkheads and cargo tanks that these rules can be applied for. The sections are clearly illustrated in the original document of CSR published by IACS.

IACS CSR has focussed on the assessment of strength of the ship based on various draft conditions, unlike that of the previously followed rules by respective classification societies. These rules are to be checked for compliance at the following draft conditions as discussed below, along with the reasons for the inclusion of the same:

Harmonised CSR has included the studies of various design load conditions, and this is an aspect that has helped design processes take a considerable leap forward. We’ll try to understand the advancement as we discuss the load scenarios below:

The previous rules used by individual classification society relied more on empirical methods and derived formulae. On this other hand, the rules in CSR have been incorporated with statistical methods to assess the strength of the ship.

Moreover, the statistical methods enable us to obtain probabilities of failure. So, in a way, designers can now quantify the safety of ships, which was not possible with the previous rules.

The fundamental concepts of the two main methods used are discussed in brief as follows:

Working Stress Design (WSD): In this method, we use only one safety factor for all the load cases to define the allowable limit of load. In fact, this is what has been practised by the rules of the individual classification societies till now. And then a check is conducted to ensure that the working stress or load is always less than the resistance or strength of the structure. This method is also known as Allowable Stress Design (ASD).

Partial Safety Factor (PSF): This method is better known as Load and Resistance Factored Design Method (LRFD). Now, this is an advanced way of modelling the loads and strength of the ship structure, and in fact, important for designers to understand the underlying fundamental.

Similar to that of the strength, all the possible loads (that include static, dynamic, fatigue, impact, accidental, etc.) have frequencies of occurrences of their own. These frequencies, and the effect of each load on the ship is different for different loads. Hence, the factor of safety considered for each load is different.

Thus, in other words, we are partially adding factors to each load, and the resistance of the ship, rather than assigning a single factor of safety to all the loads. And during the design process it is checked that the cumulative of all the factored loads must be less than the cumulative of the strength or resistance (Structural Resistance) of the ship.

This is another aspect that was not dealt in the rules by individual classification societies. Since Harmonised CSR has focussed on two kinds of ships, it has given the rule formulators, the time and scope to define permissible limits of loading, and formulae to establish the sufficient scantling, depending on every possible loading pattern that can be possible in bulk carriers and oil tankers of all configurations of tanks and holds.

This also includes all possible combinations for alternate hold loading in case of bulk carriers.

Another one of the new features of IACS Harmonised CSR is the hold mass curves. These curves are generated at various conditions like ‘Sea Going’ and ‘Harbour’. Hold Mass curves are useful to quantify:

The maximum and minimum limits of cargo that can be loaded in a particular hold, depending on different draft conditions. The draft is assumed to be that at the mid point of the corresponding hold.

The maximum and minimum mass of cargo in any two adjacent cargo holds, depending upon different draft conditions. The draft is assumed to be that at the midpoint of both the holds (special care is to be taken in case of holds that are not of the same length). 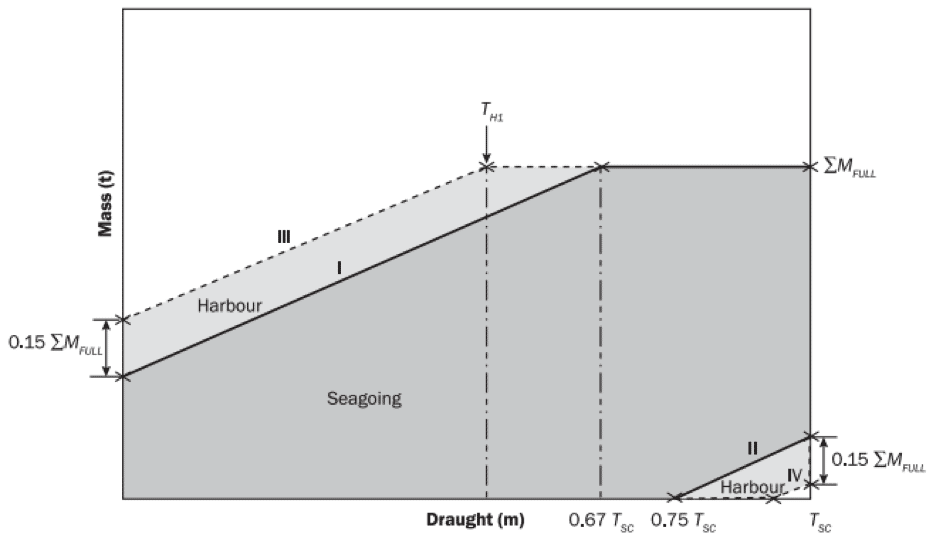 Fig: Hold Mass Curve for a Bulk Carrier (Representational Image- not to scale)

The principle is that the bending moment on the hull girder on various possible damage conditions should be such that the corresponding bending stress combined with other loads, should not exceed the residual strength of the hull girder.

So, various damage cases have been dealt with to analyse various conditions, and arrive at the minimum required strength for the hull to prevent failure at all the damage cases.

In the previous rules of individual classification societies, evaluation of shear stresses were possible. But the direction of shear flow was not dealt with in much detail, which has been fulfilled by these rules.

Shear flow along individual transverse structural members can be calculated, and added to obtain the net shear flow diagram at every section of the ship. 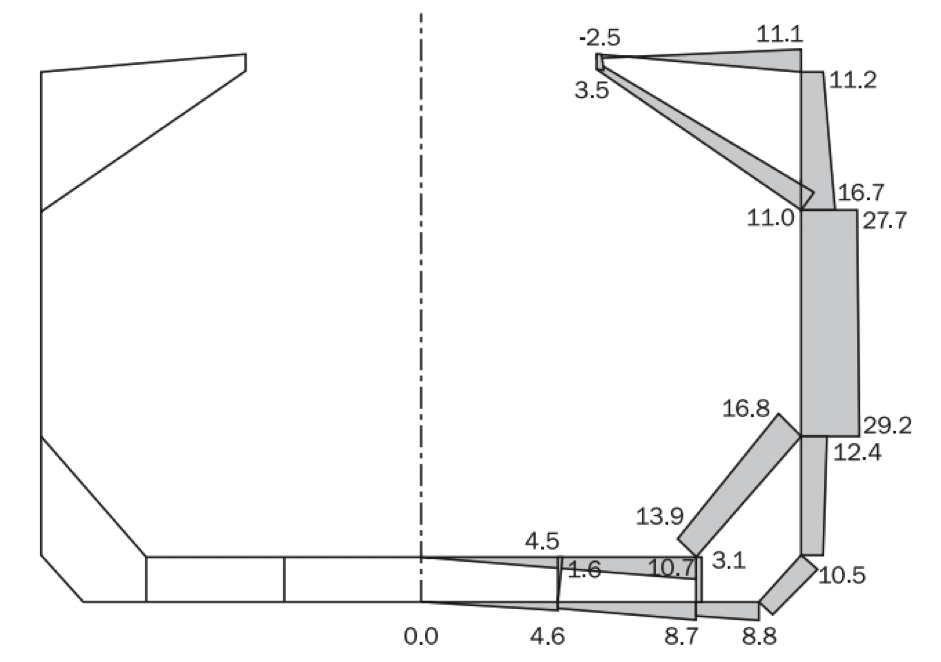 The previous rules by individual classification societies provided only snippets of instructions for modelling the ship hull for finite element analysis. But since the industry has now made it almost mandatory to check the sufficiency of calculated scantlings by finite element analysis, IACS Harmonised CSR has included detailed instructions of the procedures to be followed to model each part of the hull.

Modelling and correct meshing of end connections is very important in obtaining correct results, hence these rules have defined methods and boundary conditions to be maintained while modelling the hull girder and local strengthening structures.

In conclusion, it can be stated that the IACS Harmonised CSR is the first step towards shifting from Level I Structural Design (which was followed upto these years) to Level II and III Structural Design. Though these have not been implemented on other ship types, these rules are now under a process of feedback from industry working conditions, which would then decide whether the shift can be made in case of other ship types too.