Container Security Initiative or CSI is a unique system of bilateral information transfer. This is a reciprocal system of services between the US coast guard and a foreign port country. It was started in 2002 as an initiative to increase the security of US coast with cooperation of foreign ports. The main aim of CSI, in words of the authorities of US Bureau of Customs and Border Protection (CBP) is – the intent of Container Security Initiative is to extend the zone of security outward so that American borders are the last line of defense, not the first.

However, the aim of this system is to not only increase the security of container shipping but also to avoid any kind of interruptions in the trade. The cargo containers inspected at a host port can further move freely throughout the US ports without facing any interruptions. This system is a dual system which offers higher security without putting trade in jeopardy.

What exactly is CSI?

CSI stands for container security initiative. It is a system under which a foreign port that is a member of this initiative agrees to scrutinize cargo containers destined for its own ports. According to the reports, as much as 90% of shipment across the world happens in form of containerized cargo.

In view of the increasing threats to maritime security at a global level, CSI was started as a means to fight against the terror threats that can easily be spread through container shipping. This is a bilateral system of information exchange, which means that a host country offers to conduct a security check on cargo containers leaving for a US port. In return, the host country can send its officers to any US port to target ocean-going containerized cargo being exported to their own country.

Also, under this system, there can be exchange of sensitive information that may be deemed necessary to ensure safety of any of the ports of the two countries involved.

How does CSI work?

Under this system, container cargos leaving for US port from the host country are inspected at the leaving port using non intrusive inspection (NII) technology which includes X-ray imaging, Gamma ray inspection etc. along with other methods like radiation check.

These checks are conducted with specialized equipment designed to handle such high risk security checks without damaging the content of the cargo containers. And in return, under this bilateral system, the host countries can perform checks on containerized cargo leaving for their country from a US port. 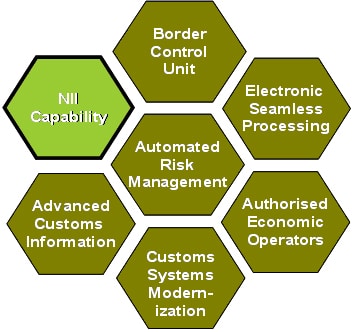 These checks are carried out at all the major ports in the host country. The host country bears the cost of the equipment needed for such checks which are mandatory for any country to be eligible for this initiative. However, the additional costs incurred are not much.

In case of unloading and emptying of any potentially threatening cargo container, the costs are borne by the importer on a US port. On the host port, the host country decides about the cost for unloading of such cargo. The screenings are supervised by the US officials at the ports. As such, at a US port, such cargos would not have to necessarily undergo further checks.