Preferential trip is a kind of electrical arrangement on ship which is designed to disconnect the non-essential circuit i.e. non-essential load from the main bus bar in case of partial failure or overload of the main supply

The non-essential circuits or loads on ships are air conditioning, exhaust and ventilation fans, and galley equipments which can be disconnected momentarily and can be connected again after fault finding. The main advantage of preferential trip is that it helps in preventing the operation of main circuit breaker trip and loss of power on essential services and thus prevents blackout and overloading of  generator. 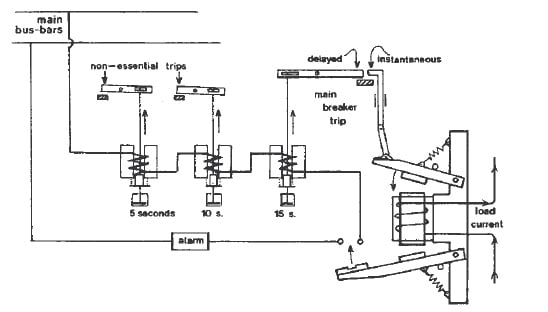 The preferential trip circuit consists of an electromagnetic coil and a dashpot arrangement to provide some delay to disconnect the non-essential circuits. Along with this, there is also an alarm system provided, which functions as soon as an overload is detected and trips start operating. There are some mechanical linkages also in the circuit which instantaneously operates the circuit and completes the circuit for preferential trips.

The dashpot arrangement consists of a small piston with a small orifice and which is placed inside a small cylinder assembly. This piston moves up against the fluid silicon and the time delay is governed by the orifice in the piston.

The current passes through the electromagnetic coil and the linkages are kept from contacting using a spring arrangement. As soon as the current value increases the limit, the electromagnetic coil pulls the linkage up against the spring force and operates the instantaneous circuit and the alarm system. The lower linkage completes the circuit for the preferential trip circuit.

The current passes through the coil in the preferential trip circuit  which pulls the piston in the dashpot arrangement. The movement of this piston is governed by the diameter of the orifice and the time delay made by the same. The preferential trip operates at 5, 10 and 15 seconds and the load is removed accordingly. If the overload still persists, then an audible and visual alarm is sounded.

The preferential trip is one of those important electrical circuit diagrams which help in removing the excessive load from the main bus bar, thus preventing situation like blackout which is a dangerous incident to ship, especially when the ship is sailing in restricted or congested waters.

You may also like to read Starting of Emergency generator.