Maintaining continuous power on the ship is one of the most important tasks while sailing. However, sometimes accidents are inevitable and due to some reason such as a breakdown of machinery, technical snag etc. there can be a power failure on the ship.

During such conditions, emergency equipment like life boat, navigation lights etc. should be in operating conditions so that they can be used in case of emergencies.  As we all know that a ship is built underclass regulations and all the necessary regulation described by SOLAS and IMO have to be followed during the construction of the ship. 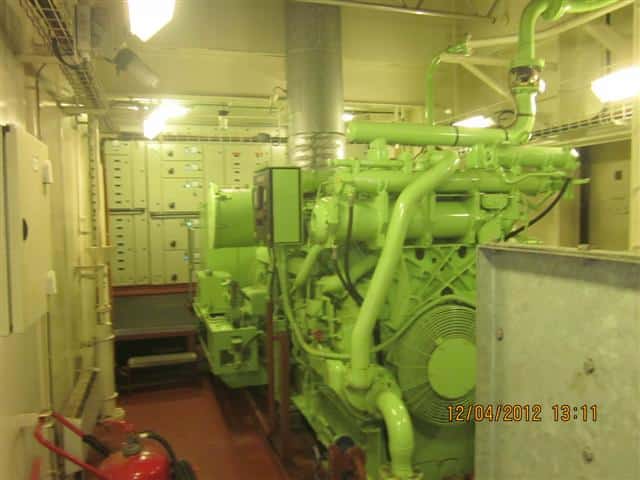 As per SOLAS regulation the emergency power equipment should come on load within 45 seconds of the power failure. When the power failure takes place the emergency generator is normally started by a small electric motor which cranks the engine for starting. This motor gets power from the battery which is being charged by emergency switchboard.  Also in case the equipment or emergency generator is unable to start due to any reason, there should be an alternate method or manual starting available in hand. As per Solas regulation, the secondary means of starting should be able to provide additional three starts within 30 minutes.

Hydraulic system for starting works on the principle of hydraulic and pneumatic, in which, the energy is first stored and then supplied or released for the starting of the engine. 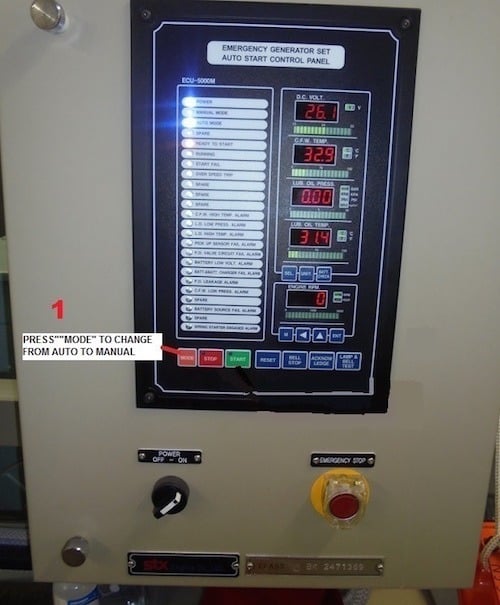 The main components of this system are:

The feed tank is provided with hydraulic oil which is pumped by the hand pump to the accumulator which helps in starting the engine.

This is the most important component of the system. It is the heart of the system where the energy is stored. It consists of a cylinder in which there is a leakproof sliding piston. Above this piston, the cylinder is pre-charged with the nitrogen gas to about a pressure of 200 bars. The oil is pressed against this piston and necessary pressure of oil is stored in the accumulator.

This is to check the pressure in the accumulator. 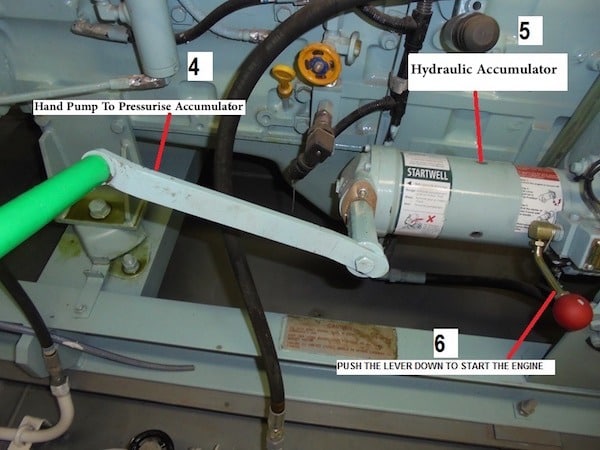 The operation of this lever will release the energy stored in the accumulator to the starter unit.

The starter unit is attached to the free end of the engine with the help of a bracket and the engine dog is attached to the engine crankshaft with the help of a suitable adapter. This starter unit consists of two opposed cylinders with rack and pinion arrangement. The pinion arrangement has teeth on one end which drives the dog having the corresponding teeth. Two helical grooves are formed inside the periphery of the pinion which is engaged by spring loaded balls inside the starter housing which helps in engaging and disengaging by the axial movement. The positive engagement is maintained by the helical tooth form of the pinion and racks.

How to Operate the Hydraulic Starter?

1) Check whether all the valves for fuel, cooling water etc. are open to the generator.

2) Check the level of the feed tank. Fill it if necessary. Please see that if the level in the gauge glass is low and the pressure in the accumulator is ok as per manufacturer recommendation then do not fill the tank as the oil will return from the starter after starting.

4) Operate the relay valve lever. The relay valve lever operates in two stages. Move the relay valve to an angle of 45 degrees, at this position the resistance is felt. In this stage a small bleed is given to the starter causing a slow rotation, engaging the dog. When the dog gets engaged to operate the lever fully. This releases the pressure in the starter and engine starts. The sudden jerk of relay lever is avoided so as to prevent damage to the gears and the clutching arrangement.

5) When the engine starts turning, release the lever and the lever goes back to normal position. The oil used for starting the engines comes back to the feed tank after starting.

6) Check the pressure in the accumulator. It should be enough for two additional starts.

7) Raise the pressure again for the next emergency.

If you liked this article, you may also like Procedure for starting emergency steering system.