You are here: Home › Marine Safety › General Procedure to Fight Fire on Tanker Ship in a Terminal
TwitterFacebookLinkedInPinterestBuffer

With tones of highly flammable and hazardous cargo and fuel oil on board, tanker ships are accident prone zones having high probability of fire accidents. The frequent cargo handling operations and loading/unloading procedures of hazardous materials make tanker ships  highly vulnerable to accidents. Sometimes in spite of taking all safety precautions, accidents involving fire do take place on tanker ships because of unprecedented events.

Tacking fire on tanker ships require strategic planning and systematic approach, along with the least response time. The approach to fight fire on board ships would differ according to the type of the fire, source of fire, and the location of the ship. Mentioned below is the general action that is taken when a fire breaks out on a tanker ship while the ship in a terminal. 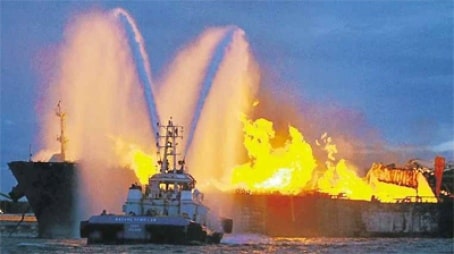 As stated by the standard rule for emergency situations, the first thing the tanker ship personnel must do in case of fire on board is to raise the alarm by sounding the recognized alarm signal which consists of a series of long blasts from the ship’s whistle. Usually, each of this alarm blast is not less than 10 seconds. However, there is a possibility that the terminal authority might ask the ship to give a locally recognized signal in case of an emergency. In such cases, the stated emergency alarm should be raised.

As soon as the signal is sounded, all cargo, bunkering and ballasting operations, must be stopped by the ship. The main engine and the steering gear must also be brought to a stand by position. All other cargo operation equipment for tankers must also be stopped immediately if they are in use.

Once this is done, the ship’s crew will take the responsibility of fighting the fire under the leadership of the ship’s captain or any other officer appointed for the task. The procedure for fire fighting at the terminal remains the same as that when the ship is at the sea. An additional team/ group might be formed for assistance in fire fighting or for disconnecting and arranging hoses from the manifold. All resources and human efforts available are used to stop the fire as soon as possible.

If the situation requires, the master of the ship might ask assistance from the terminal authority. The ship’s fire fighting team must make a united effort with the professional fire fighters from the shore to bring the fire under control.

The terminal personnel, according to the severity of the situation, can also ask the adjacent or nearby ships to shut down all loading, discharging, bunkering or ballasting procedures. In order to maintain a level of utmost safety during emergency situations, the terminal authority might ask nearby ships to disconnect all their metal arms and hoses and keep their engines and steering gear ready.

The terminal in-charge, after discussing with the control room officials, might send professional fire fighters or fire fighting tugs to assist in the emergency process. The terminal might also ask outside assistance such as civil fire brigade, medical aids, rescue launches, police etc. if the situation requires.

Fighting fire on tankers is not an easy task especially when the fire is big and has a potent fuel source nearby. The ship and terminal personnel must work with combined team effort to bring the fire under control before it becomes a major threat to the ship and the terminal.

How is ISM Code Implemented On Ships?
7 Dangerous Diseases/Disorders Seafarers Should Be Aware Of