You are here: Home › Marine Safety › 8 Reasons That Make Ro-Ro Ship Unsafe to Work On
TwitterFacebookLinkedInPinterestBuffer

A ro-ro vessel is one of the most sought after cargo ships to work on. Providing both cargo and passengers carrying capabilities, ro-ro ships reaches ports more frequently and have shorter voyages. The flexibility, speed and the ship’s functionality to blend with other transportation modes has made it popular among seafarers.

However, there are things that make ro-ro ships dangerous to work on. Ro-ro ships have been criticized for a number of reasons, mainly because of one single reason – safety of the ship.

Safety being the primary concern of ship owner, operator, and seafarer, lately ro-ro ship has become less famous to work on. We bring you eight reasons that make ro-ro ship is a bit dangerous to work on as compared to other ships. 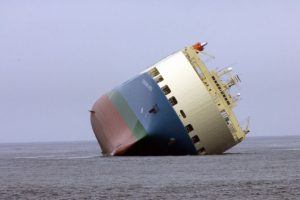 1.  The Problem of Stability

If a vessel maintains its stability at sea then it is safer to sail. However, the problem with the RO-RO ship is its design, which includes cargo in upper decks and accommodation at even higher levels.

Even a minor shift of cargo in the ro-ro vessel can become a major threat to the stability of the ship. Similarly, hull failure leading to flooding can result in capsize of the vessel in no time. The effects of wind and bad weather on high accommodation can also disturb the ship’s stability.

In Ro-Ro ships which carry only cargo, the general arrangement of cargo access door is close to the water line. In the event of listing, the door can get submerged leading to high chances for ingress of water inside the ship which will lead to capsize.

As discussed above the effect of listing of the ship leads to ingress of water if the cargo doors are open or damaged.  One weak point of ro-ro vessel is that sometimes the cargo door itself is used as a ramp which makes the ship more vulnerable to damages.

The subdivision of ro-ro ship from inside lacks from the transverse bulkheads, leading to lower water tight integrity when water ingress or flooding takes place. Lack of bulkhead also leads to spreading of fire more quickly as no subdivision is present to contain the fire.

When a ship is to be abandoned, life raft and lifeboats are used to leave the ship as soon as possible. The location of lifeboat and life rafts on ro-ro ships is usually very high, which makes it even difficult to lower them at sea especially when the ship is listing.

Another reason which acts externally on the Ro-Ro vessel is the rough weather, which may result in reduction in the stability and cause heavy rolling of the ship. Heavy rolling has lead to capsizing of ships in the past.

Cargo stowage is very important operation on Ro-Ro vessel for any loose cargo (trailer, cars etc.) can give rise to a chain reaction leading to heavy shift in cargo position. The trucks and trawlers loaded on board also carry cargo inside them and any shift of that cargo can also lead to listing of the ship.

It is very difficult to have a sequential loading of cargo as cargo arrives on terminals at different intervals and due to lack of time on port. This further leads to uneven cargo distribution, something for which nothing can be done about. Lack of proper cargo distribution has been the reason for several ship accidents in the past.