Inspiration often finds its way through real-life events. The problem of Somali pirates plaguing the waters of Africa, the Indian Ocean and its surrounding arms extending to the Mid-east has been the source of inspiration for various Hollywood dramas. Each movie speaks its own tale, highlighting the troublesome nature of the maritime zone that has been a cause of worry for the entire global shipping domain.

Most of these Somali pirates movies are based on incidents that have taken place in people’s lives. Some movies even have had real-life characters acting their part 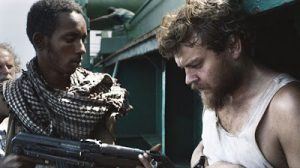 within it. These aspects have thus made these pirate movies far more impactful with the audiences not only understanding the relevance of the subject but also correlating its significance.

Five such extremely poignant somali pirates movies based on maritime piracy can be pinpointed as follows:

1. A Hijacking: A Danish movie, ‘A Hijacking’ was released in the year 2012. The plot of the movie primarily revolves around the hijacking of a Danish freight ship by the Somali Pirates. The screenplay of the negotiations that follow between the pirates and the owner of the shipping conglomerate to which the ship belongs makes for an interesting and intense drama outplay.

2. Stolen Seas: Released in the year 2012, the Stolen Seas presents a totally different picture to the Somali piracy issue. The movie plot outlines the sad plight of the crewing personnel of a Danish freight vessel taken into captivity by the Somali pirates. The confusion and the pathos faced by the translator of the somalia pirates caught in his own troubles also add to the movie’s excellent screenplay and sense of direction. It is a must-watch movie on Somali pirates for everyone who is interested in piracy at sea.

3. Fishing without Nets: Unlike several of its peers that broached the subject of hijacking by Somali Pirates, Fishing without Nets presented the sea robbers’ side of the tale. It is a touching narrative that won a lot of accolades and awards in quite a few international film festivals, including the ‘Grand Jury Award’ in the premier ‘Sundance Film Festival’ for the year 2012. The plot delves into the life of the immense struggles that Somali fisher-folk are subject to that force them to turn to sea piracy with no other recourses available to them to survive in the harsh world.

5. The Project: The project is a docudrama created by well-known American journalist Adam Ciralsky. The somali pirates movie is an exhilarating account of a specially outfitted soldier-of-fortune gang that deals with rescue missions involving the Somali sea robbers. It’s a vivid representation of the escalating problems of Somali Pirates that plague the entire global shipping world and the measures that have been to be taken to counter the same effectively. The movie has been presented in several important film festivals to quite overwhelming responses from the audiences.

Do you know any other interesting Somali pirates movies?