A two stroke or a four stroke marine engines require time-to-time maintenance for efficient and break free operation. When ever there is a change or renewal in the major combustion parts of the engine i.e. piston or liner and if the engine has gone under complete d’carb, then it is put back in operation under step running programmes known as “Breaking in” and “Running in”. 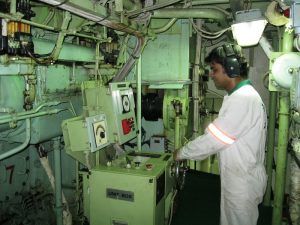 Why Breaking in and Running in?

The newly fitted liner, piston, or piston rings are machined prepared in the workshop ashore. They have surface asperities and there is no bedding between the moving surface i.e. liner and rings.

Under such situations, if proper step running is not followed then it may lead to heavy blow past of combustion gases. The blow past can be dangerous as it can lead to scavenge fire. Hence initially a step running program is required for newly fitted piston, piston rings and liner.

For a complete d’carb engine, it is important to keep an eye on various parameters of the engine under increasing load which can be achieved by breaking in and running in.

Breaking In and Running In

It is a short period of running of the marine engines under no load so that the piston rings are allowed to seat and lubricated properly. The breaking in time may differ from engine to engine and is provided in the engine manual by the makers An average breaking-in time for a four stroke engine is 48 hours.

Breaking in is carried out to achieve maximum wear rate, so that asperities break faster. For this reason HFO and low TBN oil is used. If low sulphur fuel or marine diesel oil is used, the breaking in period will increase. A low jacket water temperature is maintained to increase the rate of wear.

It is a program followed after breaking in and it is a long run program with step by step increase in the load and speed of the engine.

Just like breaking in, the running in schedules are also provided in the engine manuals and differ for parts to parts.

In two stroke engine, the cylinder lubrication is kept in higher side in terms of oil quantity for proper lubrication of piston rings and liner.

For four stroke engines with common sump lubrication, low TBN lube oil is used initially and after 30 % of load, the new recommended oil is used.

If the proper Breaking In and Running In period is not followed after the maintenance, it may lead to blow past of the combustion gases, leading to scavenge fire. It can lead to heavy scuffing resulting in increase in liner wear.

You may also like to read-How is Marine Engine Repair Done On board a Ship?