Note: The following article has not been written to demotivate young engineers going to ships or to disrespect on board practices mentioned herein. The points mentioned are a result of a brief survey and depicts real practices carried out onboard ships.

Junior engineers and engine cadets are placed on onboard ships for a reason – to learn and enhance their engineering knowledge in the practical environment of ships.

After four years of rigorous training, when young engineers go on board ships, they are full of enthusiasm and zeal to excel in their field.

Unfortunately more than often, these junior engineers and cadets are not treated like they should be.  Most of them report that they are made to do various odd jobs, which are not even vaguely related to marine engineering. In the process, they lose the valuable training time they have been allotted on ships, leaving them with a weak base of technical knowledge and dwindling interest in sailing.

Marine Insight carried out a brief survey of about 100 junior engineers and engine cadets asking them what they didn’t like about the work they performed during their first sail. We have listed seven of the most common answers we have received in this article.

This is one of the most common jobs that young engineers are asked to perform by seniors on ships. Engine room bilges must remain clean to avoid PSC detentions and junior engineers are their permanent cleaners.

Surprisingly, most of the senior engineers also see this job as a punishment for fresh professionals on board ships. Many management level engineers send junior engineers to bilges when they make a mistake or when they are not performing at par with their expectations.

There have been many junior engineers in the past who have spent half of their training time on ships cleaning bilges.

Some management level engineers also get an ego boast when they order juniors to go to the bilges whereas some believe that as they themselves have gone through such practices it is important that the juniors under them also go through the same.

No first time professional on ship wants to spend time doing shipboard job, which is not related to its academics or training requirements.  However, because of the fear of losing their jobs during these difficult times or because of threat from seniors, these juniors carry out the orders without repelling or complaining.

Junior engineers are the new paper-work personnel on board ships. After a tiring day, they are often seen in front of computers, filling up important documents, which actually need to be attended by managerial officers personally.

It has become a common practice onboard ships wherein important documents and forms are filled up by juniors, followed by a final signature by a senior officer.

As most of the time of rest hours is spend in attending paperwork, juniors often do not get proper rest and time to solve their queries and technical problems.

Official documents have become extremely important under the ISM code. Senior engineers on board ships must take out time out of their busy schedule to attend to this work  instead of passing it on to the junior engineer, who would want to spend more of his free time gathering knowledge of the ship’s machinery rather than typing away in front of the computer.

Ships take provision when at port. As the provision is to be handled by crane and arranged in the provision room, more manpower is required to handle this. As most of the crew members are busy handing various jobs when at port, juniors are often sent to the chief cook for assisting in carrying provision and arranging them in the store.

Often this is a long and tiring job, which requires a lot of time and effort. Young engineers would rather want to be in the engine room learning various procedures as most of the maintenance jobs are carried out when the ship is at port. Moreover, most of them have to report back to the engine room for assisting senior engineers, which exponentially adds to their fatigue level.

Some ships follow a practice of sending selected crew members from each department, every few days for cleaning of certain mess and accommodation areas.

As most of the times all the experienced members of the engine room department are busy carrying out important jobs, junior engineers are often sent for this job.  Needless to say, the juniors have to carry out this job without complaining, wasting their important time and effort. 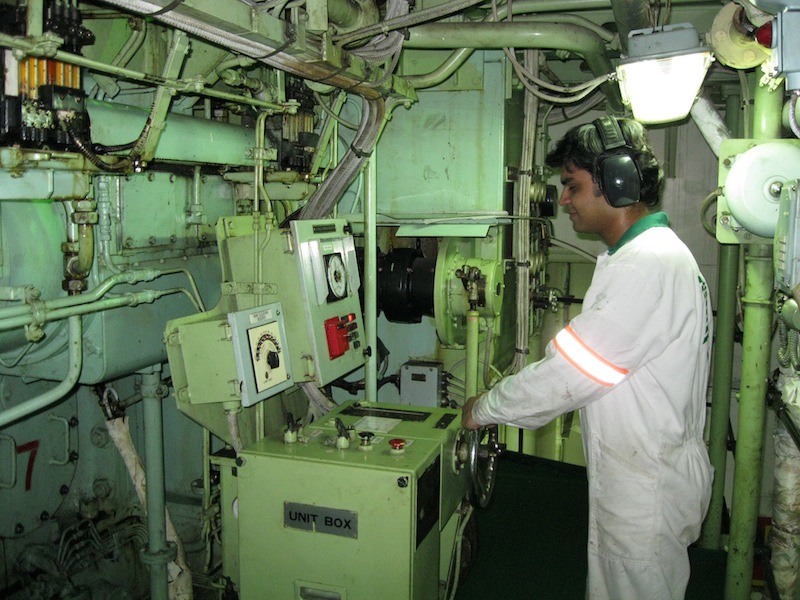 There are times when after a major overhauling, the machinery needs to be painted for the upcoming survey or inspection. Junior engineers are often assigned with such paining jobs of not only machinery but also ship’s bulkhead inside the engine room. Often ,the job of engine room and engine control room cleaning is also assigned to juniors or they are asked to assist crew members for the same.

Garbage collected over a period of time has to be discharged to shore reception facilities when the ship is at port. Junior engineers are often asked to carry out this task even when he is assisting any of the senior for maintenance work in the engine room. Most of the time he is also sent to take rounds of the whole engine room searching for garbage, scrap etc. and carry it to the open deck. A lot of time and effort, which can be utilised in gaining technical knowledge, is thus wasted.

Many might not have heard about this practice but it has been prevalent on ships which have very short time between ports during any particular voyage. As most of the deck crew are either busy or tired of the deck jobs and cargo handling, junior engineers are asked to go to the bridge to carry out the role of “look-out”. Surprisingly, through the survey we found that several junior engineers have assisted in carrying out such procedures in addition to their daily working hours.

We know most of the senior officers and members of the maritime fraternity will argue on the fact that a few of the jobs mentioned above are compulsory for junior engineers. This is important so that the young professionals coming on ships have an idea as to how these jobs are carried out and it would also help them in future when then have to assign jobs to others.

Though we agree with this idea, we also feel that making juniors do these jobs on daily or weekly basis demotivates them in a certain way. The short training time they have acquired on board ships through hard work is extremely important to them to gain more knowledge and prepare themselves for future examinations. In order to make them better engineers of future, it extremely important that  they are motivated in the right way by giving them the respect and work they deserve on ships.

Do you know about any other practices junior engineer or engine cadets hate to carry out on board ships? Let us know in the comments below.