While underway but not yet in open sea, the bosun was instructed to properly secure the port lifeboat for sea. He called on a seaman to help him with the work. By the time the seaman arrived at the lifeboat station the bosun had already begun the task. The bosun was sitting astride the forward davit cradle, close to the underside of the lifeboat, trying to secure the forward trigger line to the trigger mechanism on the cradle (see photo).

The seaman climbed the aft cradle ladder and attempted to do the same with the aft trigger line. When the seaman realised there was not enough slack in the line to permit the connection, he descended the ladder with the intention of lengthening the turnbuckle at the other end. Shortly after reaching the deck he heard a noise; he then saw the lifeboat sliding down the cradle of the roller gravity davits. 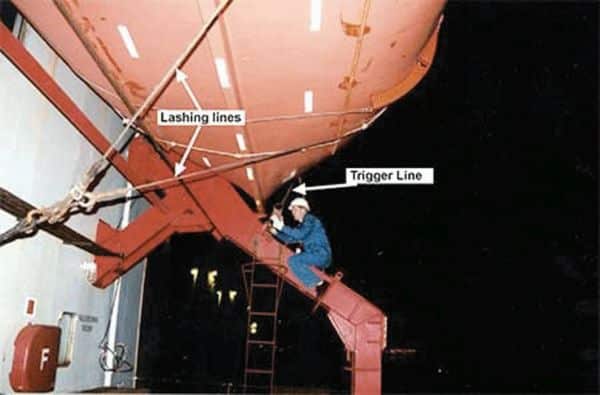 The noise also alerted the ship’s electrician who was nearby. Both the electrician and the seaman rushed to the lifeboat davit winch and applied the brake. The lifeboat stopped descending but not before hitting the bosun, sending him backwards. He clung to the trigger line momentarily, but lost his grip and fell overboard into the water 15 metres below.

‘Man overboard’ was quickly communicated to the bridge where the OOW, a helmsman and a pilot were navigating the vessel. The pilot immediately put the engine to dead slow ahead, but the confined area of the channel prevented a turning or full astern manoeuvre. The pilot also released the port smoke buoy, but this fell into the partially deployed port lifeboat. The Master arrived on the bridge and released the starboard smoke buoy. Another life ring was also thrown into the water, and persons on deck could see the bosun apparently swimming some 20 metres from one of the buoys; however, they lost sight of him within minutes. Five days later, the bosun’s body was recovered approximately 10 miles from the site of the accident.

It was observed during the course of the investigation that the outboard end of the brake lever (opposite the weighted end) was extended such that the handle was near the vessel’s side to enable the person who controlled the brake, by pushing down, to view the lowering of the lifeboat. The handle was in very close proximity to the second rung of the aft cradle ladder (6 cm below and 5 cm away, see photo below). 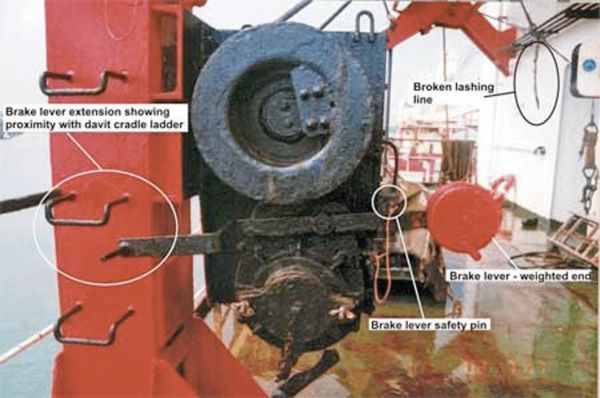 Although a manufacturer’s instruction manual for the davit and its equipment was found on board, the lowering and hoisting instructions were of a general nature. They did not include specific safe working practices or details on the harbour pin and trigger line arrangements.

During the course of the investigation it was also discovered that the bosun had participated in various operations prior to the accident, so that during the previous 24-hour period he had been off duty for only about four hours. Other facts collected during the investigation showed that the vessel was operating with fewer deck ratings than specified in the Minimum Safe Manning (MSM) Certificate. This possibly contributed to the bosun’s fatigue, as the same amount of deck work had to be
performed with fewer persons.