A self-unloading bulk carrier sailed in the morning after loading a cargo of aggregates. The pilot disembarked soon after unberthing, and the vessel proceeded at Full Ahead (about 12 knots) with the Master, 3/O and a helmsman manning the bridge. Visibility was good with a moderate breeze. Besides the two radars, the bridge team was using an ECDIS, on which, a safety contour of 10 metres (inappropriate, considering a sailing draught of 10.63 metres), a cross-track deviation limit of 0.2 mile and an anti-grounding warning zone that covered a narrow arc ahead to a range of about ten minutes’ steaming had been set.

About an hour after departure, the vessel entered a narrow strait, where the Master instructed the helmsman to engage the autopilot on a heading of 290º and handed over the con to the 3/O. He then proceeded to the communications desk on the after port side of the bridge, increased the volume of a portable music system and busied himself with sending routine departure messages. A few minutes later, the vessel was approaching a planned waypoint requiring an alteration of 24º to starboard to 314º. At this time, the 3/O visually sighted an inbound sailing vessel about 3 NM on the starboard bow. After coming on to the new course on the autopilot, he decided to pass the sailing vessel to port and adjusted the course to 321º. Simultaneously, he observed another small vessel about a mile away, right ahead and coming head on, and altered more to starboard to 324º. 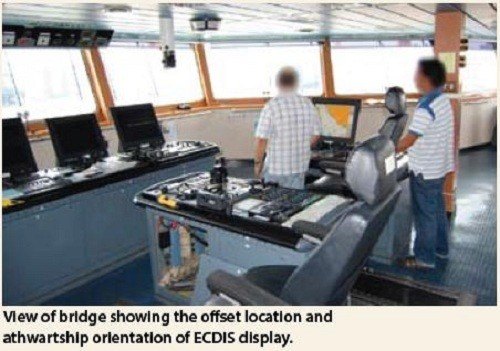 The ECDIS anti-grounding warning zone alarm then activated on the display, but no audible alarm sounded, a deficiency not known at the time. As a result, the 3/O, who was monitoring the situation from the forward console, did not realize that the vessel was heading towards shoal ground. He also sounded two long blasts on the ship’s whistle to alert the nearest vessel, which soon passed clear to port.

Thereafter, the 3/O focussed his attention on the sailing vessel ahead, which was now about a mile away. Two minutes later, the vessel ran onto a charted shoal at full speed. The severe vibrations lasted several seconds. The Master ran to the ECDIS display and, recognizing that his vessel had run aground, instructed the helmsman to switch to manual steering and ordered the wheel to hard-a-port. The sailing vessel also altered course to port and the vessels narrowly avoided colliding. After he steadied the vessel on a heading to return her to the planned track, the Master discovered that there was water ingress in No 3(P) ballast deep tank. Further checks revealed no other damage, and a preliminary report was sent to the office.

Proceeding at reduced speed, tank soundings confirmed that the ship’s pumps were able to cope with water ingress. Nevertheless, the Master ordered the breached compartment to be opened at sea and for a party consisting of the C/O, C/E and a seaman to internally inspect the damage. After they identified a 3-metre longitudinal fracture in the hull bottom plating, the inspection team safely vacated the tank and re-secured its access. With company’s and class approval, the vessel continued on its short passage towards the discharge port, where, after unloading, she entered drydock to effect permanent repairs

The ship operator was advised to issue written instructions and guidance to the fleet and carry out regular verification visits to its vessels to ensure that ship’s staff:

Real Life Incident: Cruise Ship Loses Both Its Anchors Within A Day
Cargo Vessel Beached In Karachi Due To Harsh Weather, Stuck After Losing Anchors

Real Life Incident: Man Overboard While Rigging The Pilot Ladder
The Role of General Average in the Maritime Industry