The vessel was underway when the incinerator alarm sounded, indicating the inside sluice gate was open. The incinerator was stopped and allowed to cool. A few hours later, the 4th engineer went to the incinerator room to investigate.

Standing on a small step, he opened the garbage loading door and also the sluice gate. (The incinerator feed system is such that when one door is open, the other must be closed and vice versa. Two different safety devices near the feed door ensure this operation; these must be overridden in order to look into the incinerator sluice chamber.) When the sluice gate was opened, he saw a piece of wood at the opposite end of the garbage loading door. While checking, he accidentally dropped his torch inside the incinerator door. While trying to recover the torch, the automatic sluice began to close and trapped his arm. 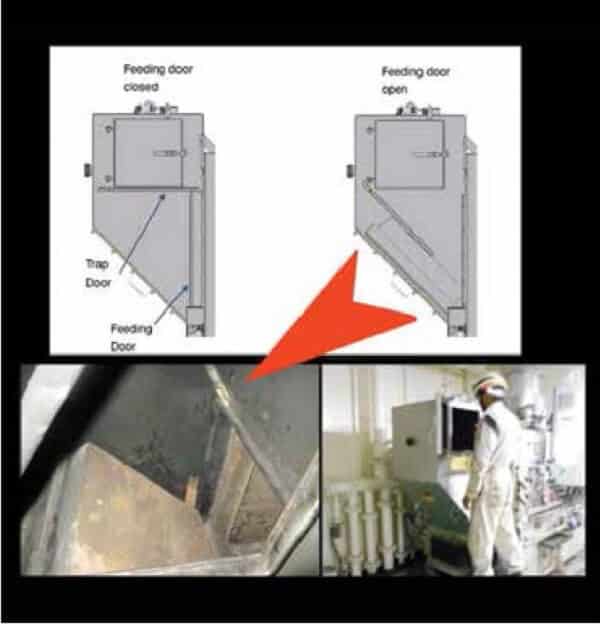 His arm firmly stuck, the 4th engineer tried to call for help but nobody heard him. After coffee, the 2nd engineer went to the incinerator room to see how the job was progressing and investigate why the 4th engineer was not at coffee. He found the 4th engineer trapped; he immediately released the victim and brought him to the ship’s hospital. Emergency notifications were initiated and treatment was given as per medical advice. The vessel deviated from its route but evacuation was delayed by foul weather and darkness. The next morning the vessel was brought alongside and the victim evacuated by land.

In the hospital, no fracture was apparent but a total obstruction of all blood vessels to the hand and forearm was confirmed. Surgery was performed immediately but to no avail and amputation of the forearm was unavoidable.