Real Life Accident: In preparation for hot work by shore workers the crew placed three fire hoses, two dry-powder fire extinguishers and a number of fire blankets in the hold. As gas-cutting began no fire watch had been established at the hot work site(s) inside the cargo hold. A tarpaulin cover caught fire, and the shore workers raised the alarm. None of the ship’s crew were in the hold and there was no attempt to use a fire extinguisher or the other fire-fighting equipment that had been prepared. The chief mate saw smoke coming from number one cargo hold. He too raised the alarm, alerting the ship’s Master via handheld radio. The Master immediately went to the vessel’s bridge and notified the authorities ashore. He also notified the ship’s local agent before leaving the bridge to co-ordinate the fire-fighting on deck. Both of the ship’s fire pumps had now been started.

The chief mate entered the cargo hold with a fire extinguisher but once in the lower hold he saw the tarpaulin was well alight and generating dense smoke, so he quickly exited the cargo hold. The vessel’s crew were standing by on the main deck with pressurised fire hoses. Shortly thereafter the fire burnt through the oxy-acetylene hoses that had been left on the tween deck; the acetylene ignited, resulting in a fire ball and dense black smoke. The Master ordered the crew to spray water on the cargo adjacent to the fire and to check that the oxygen and acetylene cylinders had been turned off.

Soon after the alarm had been raised the ship’s crew were fighting the fire with fire hoses and boundary cooling. Shortly thereafter several harbour tugs also joined in boundary cooling. With the assistance of shore fire-fighters the fire was extinguished and the ship’s crew began checking compartments adjacent to number one hold for hot spots and fire risk. No hot spots were found and a fire watch covering the hold and adjacent compartments was established. 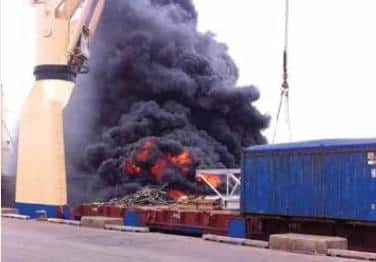