The vessel had just cleared the jetty and was under pilotage. The telegraph order was given for full ahead. However, the RPM remained low, at 130, with an estimated speed of 5.8 kts. High density black smoke was then seen coming from the funnel. The chief engineer reported to the bridge suspecting a problem with the main engine turbocharger. After safely anchoring, the turbo charger was opened up by ship staff. Upon inspection it was ascertained that the rotor assembly required balancing.

After taking the turbocharger cartridge to the workshop for checking, following damage was evident:
1 Turbine blades worn oval on half the wheel profile.
2 Turbine side shaft labyrinth deeply grooved and worn undersize and the shaft bent at the turbine end journal.
3 Turbine end journal bearing was subjected to extreme heat and had turned blue.
4 Shaft bent at the compressor end journal.
5 Compressor impellor worn oval on half the wheel profile.

Damage to the turbocharger took place due to excessive wear of the turbine side bearing, thereby losing the centre line of rotation. On the whole, the components in the radial direction were found damaged. 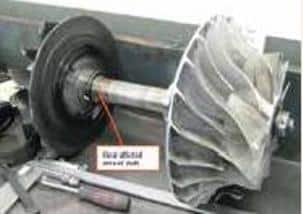 The vessel had experienced many days of heavy weather on her last inbound voyage. Due to her small size the vessel was rolling and pitching extensively. This would have caused constant load changes on the main engine due to the change of water depth at the propeller.

The constant load change caused surging of the turbo charger and the lubricating oil could have developed high soot levels caused by the increased piston blow-by (main engine being a trunk piston design) during the load changes.

Also, due to the fact that this engine has a common lubricating system, the turbo charger is lubricated using the main engine crankcase oil. This makes it more susceptible to damage if the lubricating oil contains elevated solids notwithstanding a functional oil filter.

Under normal circumstances (when oil is clean), this may not be detrimental but the circumstances which the vessel had experienced can cause high soot levels to build up very quickly. The soot would most probably act as a grinding agent and increase bearing clearances. The only caution that the vessel’s crew had followed was to reduce engine speed to ensure the exhaust gas inlet to turbocharger did not exceed 495?C; the surging was allowed to continue.

Following a review of the sequence of events, it was noted that the main engine RPM was not reduced sufficiently in rough weather, with severe pitching and surging conditions. Due to the small size of the main engine, a four stroke-trunk piston type, even small swells and weather conditions have considerable effect on the engine operations and parameters. Even though the engine RPM was reduced it was not sufficient to eliminate/minimise surging of the turbo-charger. Vessel engineers did not reduce the main engine load further as that would have required change over from fuel to diesel oil. Some of the lessons learnt include:
1 Reduce main engine speed if surging occurs. If further reduction requires changing over engine to diesel oil, this should be carried out and the charterers and owners advised.
2 Ensure main engine lubricating oil purifier is working well.
3 Ensure bypass filters and turbocharger lubricating oil filters are clean.
4 Carry out routine marine grit cleaning on the turbine side.

Tell us your views in the comments below.