Owned by American movie mogul David Geffen, the Pelorus is a superyacht that overwhelmingly lives up to its christened title. Pelorus is the anglicised version of the Greek Pelorios which refers to immenseness.

Designed according to the specifications of Tim Heywood (external designing) and Terence Disdale (internal designing) designing corporations, the superyacht was built by the German yacht building conglomerate Lurssen. Launched in the year 2003, Pelorus is rated amongst the world’s biggest privately-owned superyachts. 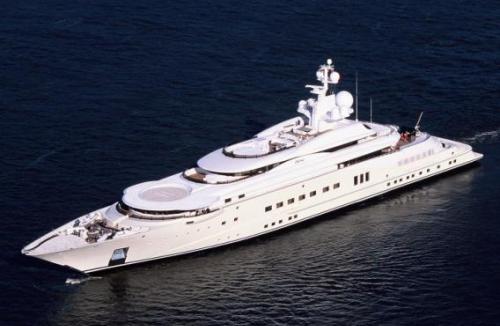 Built in Lurssen’s Bremen shipbuilding yard, the vessel bears the Bermudian registration flag. Prior to being owned by David Geffen, the vessel boasts of several premier ownership rights, first under a Saudi business tycoon and later on with the Russian oligarch Roman Abramovich.

–          Functionality is through two Wartsila diesel engines, each generating energy up to 5,300 Horsepower

Amenities aboard the vessel include a couple of heli-decks, Jacuzzis and spas, Jet Skis and several other assorted water activities’ equipments. This accentuates the whole experiencing of living aboard the vessel. The vessel is available for chartering for interested patrons. Pelorus navigates the western part of the Mediterranean while traversing through the waters of the Suez during the months of autumn and winter. Considering the popularity of the vessel and the navigational route it takes, it wouldn’t be wrong to assume that the list of potential takers for chartering would be minimal.

You may also like to read:- The Awe-Inspiring Adastra Superyacht
References & Image Credits: superyachtfan, charterworld, superyachttimes