Norwegian Bliss is scheduled to leave the covered building dock at the MeyerWerft on Saturday, 17 February 2018. The float-out is due to begin at about 8 am. Possible delays or changes may be caused by the weather.

After leaving the building dock, Norwegian Bliss will berth at the shipyard’s outfitting pier to be fitted with its funnel. The ship will then remain in the shipyard port until its passage through the river Ems up to the North Sea, which is scheduled for the second weekend in March. In the meantime, further outfitting work will continue together with testing and acceptance procedures by the ship owners. At the same time, the approx. 1,600 members of the crew will start their training on board, as the cruise ship will be welcoming its first guests mid-April 2018 straight after delivery. 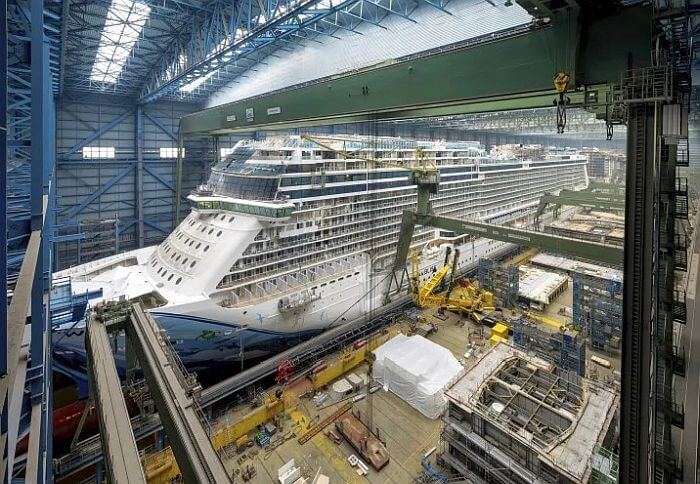 In order for Norwegian Bliss to be able to berth at the outfitting pier, the first floating section of the AIDAnova that is currently moored here will have to be moved to another berth in the shipyard port. The second floating part of this ship that is currently also in building dock II in front of the Norwegian Bliss will leave the dock already on 16 February 2018 to berth in the shipyard port. After Norwegian Bliss has vacated building dock II, the two floating parts of the AIDAnova will be manoeuvred back into the dock for work to continue.

Due to all the necessary manoeuvres in the shipyard port, the Papenburg dock gate will be closed from approx. 4 pm on Friday 16 February 2018 until about 8 am on Sunday, 18 February 2018.

All times are subject to potential changes due to weather conditions.

Norwegian Bliss’ float out can be viewed online via webcam at meyerwerft.de. Norwegian Bliss is rated with 167,800 GRT, measuring 334 metres in length and 41.4 metres in width and offers capacity for 3,998 passengers.