In a world filled with marine architectural marvels, the boat lift located at Falkirk Scotland sets an altogether different example. Bearing the distinction of being the only revolving lift to ferry boats in the world, the Falkirk boat lift colligates the Union Canal with the Forth and Clyde Canal in the central part of Scotland.

Built at a cost of nearly 20 million pounds, the project to build the boat lift that would revamp and rejoin the two canals began in the early 2000s. The Falkirk boat lift was officially introduced by the Queen in the year 2002. The boat lift is designed in such a way that it has two caissons which lift the boats from the water and hoist them onto the water-link connecting the two canals. 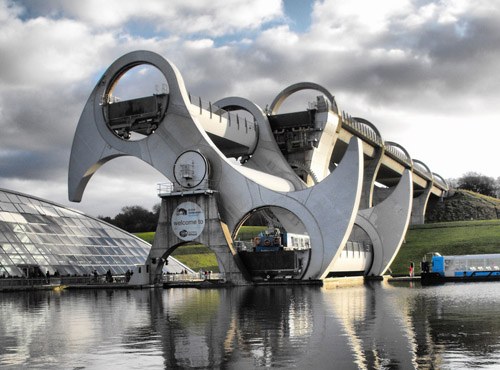 These caissons are demarcated at a distance of 25 metres from each other with an axle placed centrally. The boatlift measures 35 feet lengthwise and width wise with its height being compared to eight double-motorbuses stacked one-on-top-of-another.

The components of the boatlift were built in the Butterley Engineering’s Steelworks, located in English county of Derbyshire and then later transported to the location to be assembled appropriately. All-in-all, the construction consists of over 1,000 tons of steel, while around 15,000 bolts have been used to ensure that the construction does not lose its viability at any point of time. These bolts have been affixed with a depth of nearly 10 mm and each has been tightened manually.

The boats are lifted onto the caissons with the help of motors that function hydraulically and which in-turn are operated with the help of one motor which offers a force of 30 horsepower. The process of the boats entering the caisson takes about five-and-a-half minutes. At any given point of time, the boatlift has a capacitance to transport more than eight boats.

The location of the Falkirk boatlift is also equally spellbinding just as the construction itself. Right next to the boatlift, there is an amphitheatre and interested viewers can take boating rides to the location and get a feel of how the contraption carries out its due processes.

With the help of this boatlift, a revolutionary and ingenious way of rejoining the nearly defunct water transportation was able to be developed. Since the water network passing through these canals is regarded to be exceedingly important for business transportation, the conception of the boatlift and its resultant successful viability is really appreciatory and laudable.