According to IMO’s resolution of Marine Environment Protection Committee 5 (XIII), oil tankers shall be provided with effective oil/water interface detectors approved by the administration for a rapid and accurate determination of the oil/water interface in slop tanks and shall be available for use in other tanks where the separation of oil and water is effected and from which it is intended to discharge effluent direct to the sea.

What are interface detectors?

An interface detector is an electrical instrument for detecting the boundary between oil and water in tanks. However, the equipment is not limited to oil/water application but can be used wherever an accurate interface control between two liquids is necessary.

Though generally both fixed and portable type interface detectors are an important part of cargo operation equipment on ships, the portable ones are more widely used because of the ease of handling and maintenance.

When at sea, the tanker ship’s dirty ballast water or oil contaminated water from tanks in the cargo area, other than slop tanks, may be discharged by gravity below the waterline, provided sufficient time has elapsed in order to allow proper oil/water separation. Interface detectors are used to examine the ballast water before the discharge to ensure that the height of the interface is safe enough to avoid traces of oil. Interface detectors are also used in various other tanks to monitor the level of oil and water. 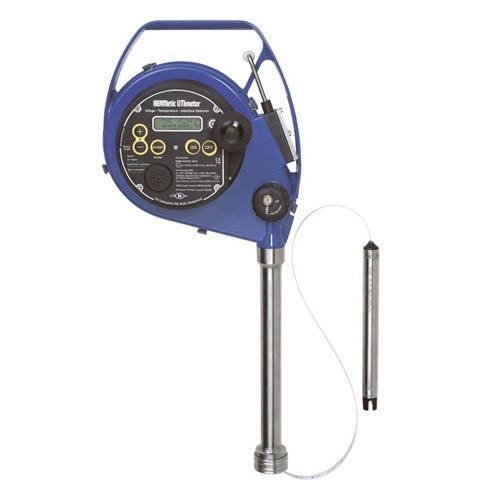 How interface detector on ships work?

Interface detectors works by measuring the difference in voltages according to the conductivity of water. The interface is detected by a sensor attached to a weight, which is lowered in the tank. By measuring the energy absorption of the fluid surrounding the sensor, the interface detector senses the emulsion regardless of density, viscosity, temperature, pressure or pH.

Interface detectors are basically a kind of conductive level sensor, which help in point level detection of conductive liquids. They use a low-voltage, current limited power source applied across different electrodes. A conductive liquid which contacts both longest and shorter probe completes a conductive circuit. The change in conductivity helps in detecting the oil/water interface.

As interface detectors use low current and voltage, they are extremely safe and are made to be intrinsically safe to meet international standards for hazardous locations on ships. Safety of the ship and its crew should be the prime concern while carrying out cargo operations on tanker ships. Oil water interface detectors are thus used to ensure that the level of oil is within the safety limit so that no oil pollution happens when the water is discharged overboard from slop or ballast tanks.