Thordon Bearings is alerting its customers to the recent publication of a DNV GL study that concludes the recent surge in propeller shaft bearing failures is indeed related to the use of certain environmentally acceptable lubricants (EALs).

In conclusion to the first phase of an ongoing investigation, DNV GL reported that “there are transient conditions involving high oil film pressures and/or low oil temperatures where [synthetic] EALs will have a reduced load-carrying capacity. The vast majority of stern tube bearing failures in recent years occurred in the same type of transient conditions – during hard manoeuvring at high ship speeds, during mooring trials, and when operating with a partly submerged propeller”.

George Morrison, Regional Manager, EMEA – ANZ, Thordon Bearings, said: “While no ship operating a propeller shaft bearing lubricated by water – an EAL designated by the US Environmental Protection Agency – has been immobilized to date, there has been conjecture concerning the poor operational performance of some synthetic lubricants. It is now unequivocal: the performance of these EALs is less than satisfactory.” 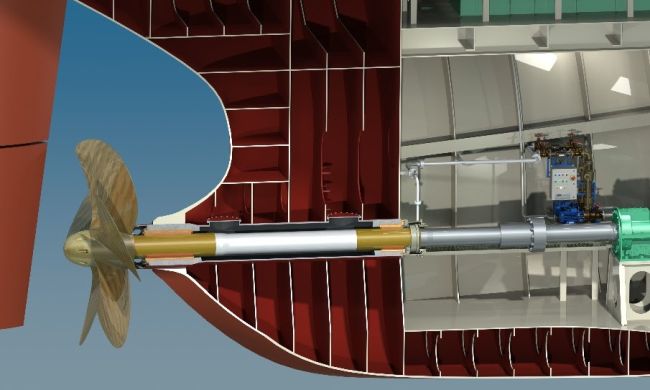 The DNV GL report and a subsequent webinar, titled Environmentally Acceptable Sterntube Lubricants – How to Avoid Costly Failures, revealed a sharp increase in sterntube damage affecting all ship types and sizes following the 2014 introduction of rules prohibiting the use of mineral oil in oil-to-sea interfaces of vessels trading in US waters.

DNV GL found that the dominant failure was bearing wiping – when oil film is lost, resulting in metal to metal contact. It concluded that synthetic EALs behave differently than mineral oils under different operating pressures and temperatures, affecting viscosity and load bearing capacity. EALs based on unsaturated esters were singled out as being particularly prone to failure.

“This investigation verifies our long-held view that these EALs can impede shaft bearing and seal performance, damage critical components and compromise oil-tight integrity, resulting in emergency remedial repairs at significant cost to the shipowner,” added Morrison.

The investigation did not include seawater lubricated propeller shaft bearings because this arrangement falls under different class rules to those relating to sterntube bearings lubricated by mineral or synthetic oils.

“We have different rules covering seawater-lubricated bearings, and there is no problem to use those kind of designs for DNV GL classed ships [sic]. We did not see a necessity to include those in the same study,” said DNV GL in response to a written question put forward during the webinar.

The report’s findings are likely to send a ripple of concern throughout the industry given its investment in EAL oils, which were widely seen as a technically viable solution to reducing marine pollution from mineral oil-based lubricants.

Craig Carter, Director of Marketing & Customer Service, Thordon Bearings, said: “I would not be surprised if the classification societies start to revise their shaft alignment and withdrawal rules for bearings using this kind of lubricant. There is no doubt that lubricating white metal bearings with biodegradable oil can be technically and commercially risky. With mineral oil-based lubricants now rightly regarded as environmentally unacceptable, the only proven EAL option available for lubricating the propeller shaft bearing is seawater.”

Since 2014, DNV GL says it has noticed an increase in the number of ships adopting water lubricated propeller shaft bearing arrangements.

The classification society aims to continue the EAL study, investigating oil film thickness and thermal properties. A third phase of the investigation will look at mid-to long-term degradation, hydrolysis and wear rates of those seals and bearings using these types of lubricants.