The largest and most powerful engine from MAN Diesel & Turbo’s portfolio ever designed and built has entered service. Built by Doosan Engine in Korea and rated at 75,570 kW (103,000 horsepower), the engine is an MAN B&W 11G95ME-C9.5 two-stroke type that acts as prime mover aboard the ‘MSC Jade’. The 19,437-teu container vessel is operated by Mediterranean Shipping Company (MSC), the global container shipping company. Daewoo Shipbuilding (DSME) delivered the newbuilding on 20 May, which subsequently sailed the short tour to Busan. 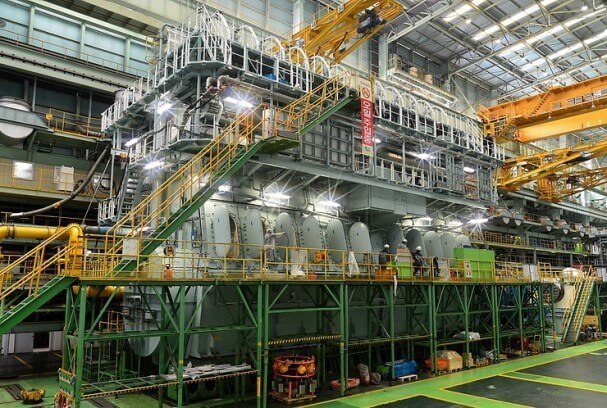 Doosan Engine reported the main engine’s initial start during October 2015 and a successful shop-test subsequently followed. The engine is the first in a series of six ordered by MSC, with a second sister-vessel shortly scheduled for sea trials and two further vessels, currently finishing construction at Samsung Heavy Industries, due for sea trials during June.

Ole Grøne, Senior Vice President Low-Speed Sales and Promotions, MAN Diesel & Turbo, said: “We attribute the G95’s popularity in this segment to its ability to provide sufficient power for such vessels to reliably achieve their desired operating speed. Here, the G95’s rpm ensures that a propeller of optimal size can be employed, in turn delivering a low fuel-oil consumption for an optimal fuel economy.”

The G95ME-C9 itself is an important part of MAN Diesel & Turbo’s G-engine programme. The engine, with a bore of 950 mm and a stroke of 3,460 mm, provides 6,870 kW/cylinder at 80 rpm and 21 bar MEP (in L1) and was introduced as a supplement to the successful S90ME-C9/10 engine types, allowing the engine to be further de-rated thanks to the larger cylinder bore and/or fewer cylinders to be installed.

Following this trend, as well as those for cost-down and downsizing, the S90ME-C has recently been supplemented with a G90ME-C10 version.