The popular insurance and reinsurance Broker Company of UK, Jardine Lloyde Thompson along with Convoy Escort Program Ltd has introduced a concept for an escort program for merchant ships passing through Gulf of Aden- an extremely sensitive piracy area.

This Convoy escort program will cost US $ 30000 per ship and will have maximum of four ships that will cross the sensitive area of Gulf of Aden within 3-4 days. 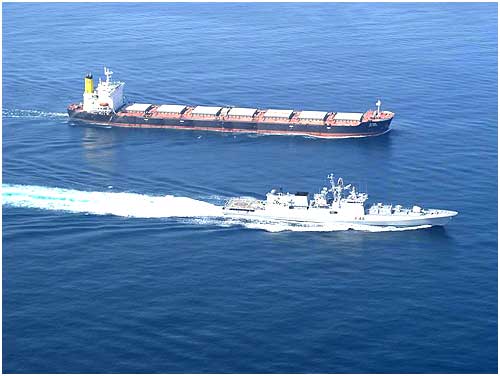 The Private escort will be of the Navy and accompanied by a fleet of several bullet proof patrol boats in the caravan. It will also carry experienced security personnel equipped with arms and ammunition to counter act the attack of pirates.

The Program has two packages – one of which provides 7 ex navy patrol boats with 8 armed guards in each one and will cost USD 30000 per ship and the other package consists of 11 patrol boats costing USD 50000 per ship. The convoy will escort the merchant ships for 3-4 days until they are out of the critical zone.

Till now few maritime nations have allowed Armed guards on merchant ships (Britain is one of them), and this convoy escort program seems to be the guarding angle for merchant ships plying in the Gulf of Aden.

With new private security companies coming up in the market, some charging as low as USD 20000, the private security services market has become extremely competitive.  However, the convoy deal is still beneficial for shipping companies as the safety of their ships will be in the hands of experienced and well equipped ex-Navy troops.