With the increase in demand for alternative propulsion systems that not only improve the overall efficiency of the ship but also reduce the carbon footprints, innovators in the shipping industry are leaving no stone unturned to find a solution to this grave problem. With all the options presently available at hand, electric propulsion system seems to have a promising future.

But as everything comes with a consequence, this system has its drawbacks too. Will or will it not make it to the engine room of every ship – this only time can tell. But what we can do is weigh its pros and cons and see if it has the vital “X” factor that everyone is talking about. 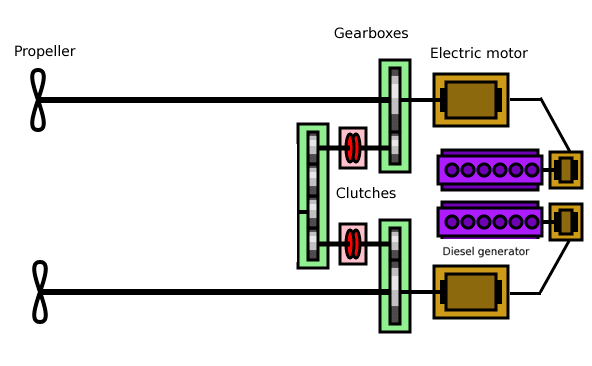 The electric propulsion system is pretty simple in merchant ship are normally characterized based on the type of prime mover attached to it. The most common types are:

As the name suggests, in this system a shaft from a prime mover is used to rotate the propeller which is connected either with reduction gear and high-speed motors or driven directly by a slow speed motor. Both asynchronous and synchronous motors are used for this purpose. The motor’s and their drive systems voltage (low or medium) will depend upon the propulsion power requirement of the ship.

This propulsion type is a combination of steering and propeller system. The pod propulsion unit is fitted in the place of the conventional propeller, and it comprises of an electric motor mounted inside the pod, and the propeller is directly connected to the motor shaft. The pod propeller assembly can rotate 360 degrees at its place making it easier for ships to have an ahead and astern control without needing for reversing the prime mover (here motor) or using a controllable pitch propeller. To accommodate the rotation of pod propeller, slip rings are used to supply the power from motor to the pod unit. Power is fed through a variable-frequency drive or cyclo-converter that allows speed and direction control of the propulsion motors.

We managed to list the main advantage of the electrical propulsion system. They are as follows:

Yes, there are disadvantages of this system as well. They are:

Putting advantages and disadvantages side by side, we can confidently say that the former easily surpasses the later ones. From a long term perspective, we feel that electric propulsion will not be a bad bet, keeping in mind the amount of initial investment that needs to be made, and which we think will definitely pay-off at a later stage.