You are here: Home › Main Engine › How to Test Ship’s Main Engine for Slow Steaming?
TwitterFacebookLinkedInPinterestBuffer

More and more companies are trying the option of slow steaming to save fuel costs at available opportunities. In the bulk carrier market it is normal to instruct the ship to move at slow or economy speed towards certain destination until the charter is finalized. Sometimes the charters also demand that the vessel should proceed at slow steaming and a relevant clause is inserted in the charter party.

Normally, ships have a speed v/s consumption table at various RPM in ballast and loaded condition. It is a usual practice that the charterers ask for this data prior to fixing the charter party. In today’s scenario the charterers may also ask for slow steaming data. In cases when a long anchor is expected or when the cargo is not time sensitive it may be profitable to the charterer to run the ship as slowly as possible to save fuel as well as anchoring costs. 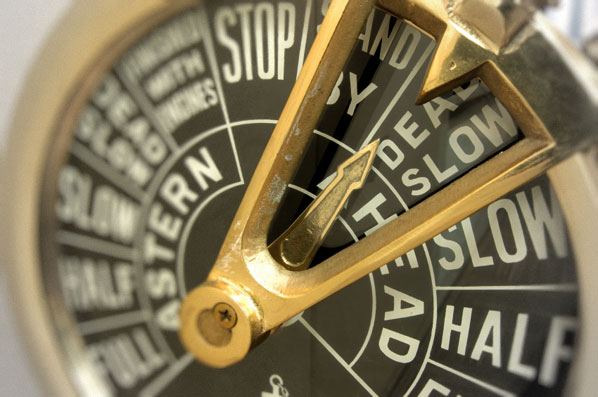 However the Chief Engineer has a duty towards his machinery and must ensure that the main engine is run properly without compromising its safety and preventing long term damage. Thus a correct and safe economical speed / RPM has to be told to the charterers. Many times in the event of insufficient data as in old ships, a sea trial has to be done to find the eco speed/RPM and fuel consumption.

Due to bad weather and commercial pressures sometimes we have to run the main engine at maneuvering RPM with auxiliary blower cut in. The blowers are put in manual mode to avoid their cutting on and off and damaging the motor due to repeated starts and the associated high staring current. But these are rare occasions and a Chief Engineer should advice the Master against such operation continuously unless it is unavoidable.

Normally when trying out the engine for low load operation we generally try to run the main engine at slowest RPM at which the exhaust boiler can cope up to and the auxiliary blowers are off and there is no chances that a sudden load change due to course alteration or change in weather will lower the load and allow the auxiliary blower to cut in intermittently. As during sailing no fuel is allotted for the boiler firing in the charter party and to avoid unnecessary maintenance of the boiler it is prudent to report such RPM to the charterers.

Given below are the main engine characteristics recorded during an actual sea trial done at sea on a fair weather day to enable reporting the eco RPM/speed to the company and subsequently to the charterers.  In this particular engine the turbocharger exhaust outlet temperature is a limiting factor as at 330 deg C the high temperature alarm is generated and resets at 324 deg C.  The other limiting factors are high cylinder exhaust temperatures; low scavenge pressure and boiler pressure. The oil fired boiler fires when the pressure drops below 5.5 bars.

MAIN ENGINE CHARACTERISTICS BASED OF TRIAL DONE AT SEA 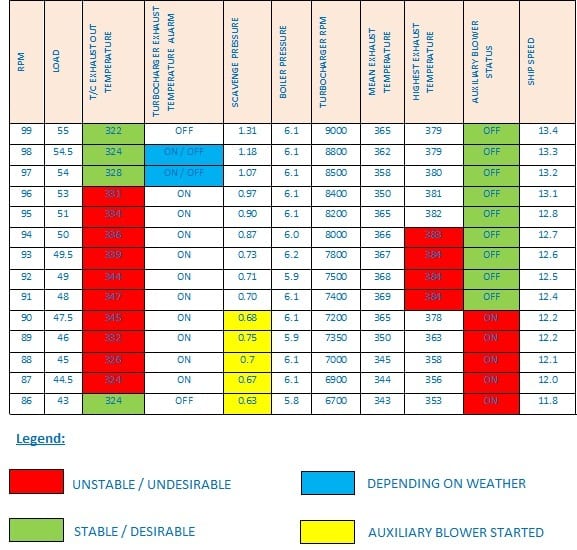 The above data is from a 73000 MT dead weight Panamax Bulk carrier fitted with a six cylinder B&W 6S50MC-C main engine with a Maximum Continuous Rating of 14100 BHP @ 119 RPM. It has a fuel consumption of 35 MT/day at sea speed of 13 knots at 85 % MCR which is 11990 BHP @ 113 RPM. The trial was done to find out the fuel consumption at various RPM at slow steaming.  It also helped to find out the safe eco speed and RPM.

From the above sea trial data we learn the following about the main engine:

Thus after the analysis of the above data we infer that taking the advice of the manufacturers into account and the associated risks and maintenance involved the best bet is 99 RPM with a fuel consumption of 28 MT/day. Thus a saving of 7 MT/day of fuel is saved amounting to USD 7000.

This article is based on the experience of the author as a sea going Chief Engineer.