You are here: Home › Life At Sea › A Woman Chief Engineer from Brazil Describes Her Interesting Life
TwitterFacebookLinkedInPinterestBuffer

Juliana works as a chief engineer on an oil tanker. Mother to a 13 year old girl, Juliana lives with her family in Vitoria, Brazil. She is one of the very few women chief engineer and enjoys every moment of her professional life. Juliana wants to motivate girls around the world to come forward and explore the numerous opportunities that Marine Industry provides.

Men have been dominating the Maritime Industry for quite some time now. Life on ship is no bed of roses and no one knows it better than a mariner. Climbing up the hierarchy level on ship is no child play. It’s requires guts along with steady mental and physical strength. Being a Chief Engineer of a ship is a big deal; being a Female Chief Engineer is even a bigger one!

Marine Insight brings to you the story of a Female Chief Engineer from Brazil. The Few, the Proud!

Juliana is a 28 year old Female Chief Engineer, who works in an oil tanker in Brazil. She is one of the handful female chief engineers in the Country. The environment of an oil tanker is a tough one to work in and Juliana is one of the toughest chief engineers the company has. Her ship supplies fuel to other ships coming to the port and her job requires her to be on toes all the time. 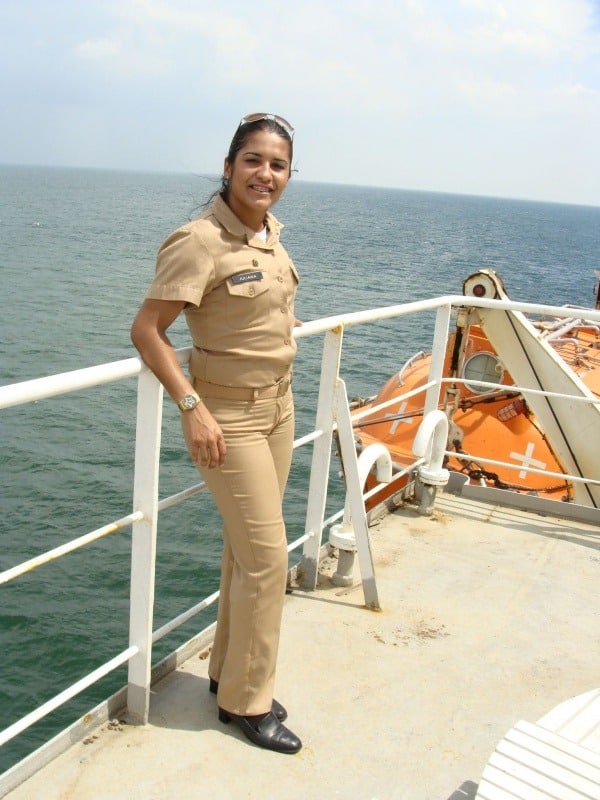 Unlike most chief engineers, who avoid getting dirt on their hands, Juliana loves to put her hands in grease. She changes oil, filters of marine engines and attends all routine performance and maintenance needs. According to Juliana, her job is not something that other women cannot do. Though the work on ship requires considerable amount of physical strength, a trained women officer can easily handle it. When asked the same question to Juliana, she said, “I think many things should be done not with force but with intelligence. Many men think that women do not have the capacity, but it is up to the women to prove these men wrong. And it is very much possible if there is enough dedication”.

Juliana wants women to explore several great opportunities that the shipping industry provides. She has been sailing as a chief engineer for last 2 years and she loves every bit of her job. She has sailed for as long as 45 days continuously from Brazil to China and she is very happy with the career choice she has made. To live this interesting live, she gets full support from her family. Her work involves constant traveling to new places, during which, she has made many new friends and visited several interesting places. Just like other mariners, she also has had her share of experiences. She often feels homesick, goes through professional politics, and misses her loved ones. But at the end of the day, she loves the satisfaction she gets of doing something adventurous and unique.

Juliana lives in Vitoria, Brazil with her family. Today, she is a mother to a beautiful 13 year old girl and balances her professional and personal life extremely well; of course with a little help from her family. According to her, a woman in the maritime industry lives several lives simultaneously. She has to play the role of a mother, a wife, a girlfriend, a boss, and finally a warrior! Something not everyone can do!

Using the platform of Marine Insight, Juliana wants to inform all the women out there in the world that they have immense potential to seek a respectable position in the maritime field. She feels that it is important for women to believe in themselves and look for unique career opportunities in the marine industry.

How To Stand With Women Working In Maritime

A Woman Seafarer Describes The Challenges She Faces On Board Ships

8 Career Options For Women Seafarers After Sailing At Sea