An engineer attempted to open the incinerator door while underway. His thumb was trapped and crushed between the door holder lever and the stopper plate (see photo). He was quickly transferred to the ship’s hospital and first aid was administered. The victim was disembarked and at the hospital a fracture of the thumb was diagnosed and orthopaedic surgery was necessary.

There were no reported difficulties in opening the door, and it is not known why the engineer placed his left hand at the indicated location. The engineer had two prior contracts with the same ship so he was familiar with this incinerator unit. 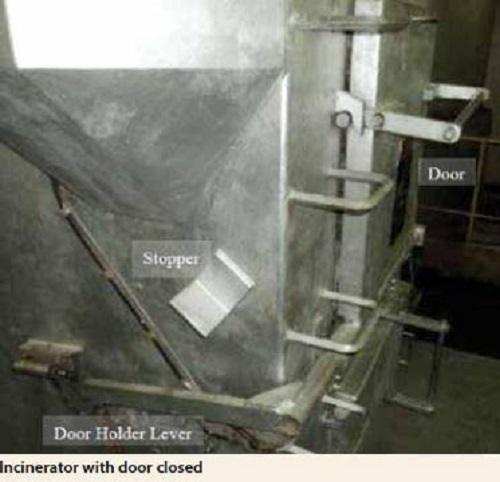 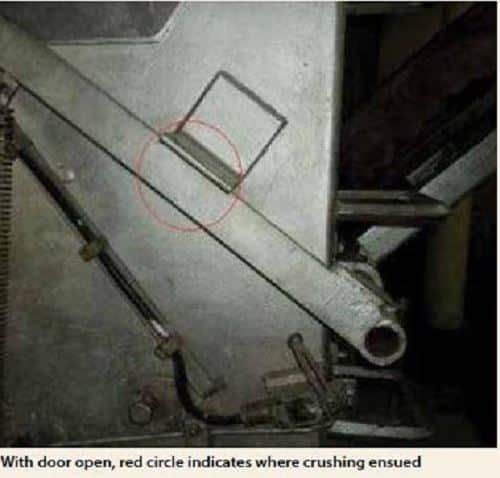 However, the day before the incident there had been an unexpected engine room Unmanned Machinery Space (UMS) suspension. Due to this UMS suspension he had to stand watches in the engine room and as a consequence had inadequate rest for the period leading up to the accident.

1 Inappropriate handling of the equipment.
2 Improper decision-making and lack of judgement.
3 Fatigue due to violation of resting hours the previous day without adequate compensatory rest.

Also, it appears the risks involved were not taken into consideration. Since the duties of operating the incinerator were considered ‘routine’, no risk assessment had been done on the task. Therefore, the company also found the following:

4 Inappropriate management of engine staff.
5 Inadequate training and familiarisation.
6 Lack of a risk assessment on the use and handling of the incinerator.