A small multi-purpose vessel crewed by a Master, an officer, and two ratings was up-bound in a river system. The OOW was alone on the bridge and the duty rating was making a safety inspection of the ship.

The Master had just been woken so that he could take over the navigational watch as planned. The OOW switched from autopilot to manual (FFU tiller).

About one minute later, he tried to make a course alteration to starboard and noticed that the rudder was not responding normally. He then switched to the second steering pump, but the rudder did not respond. 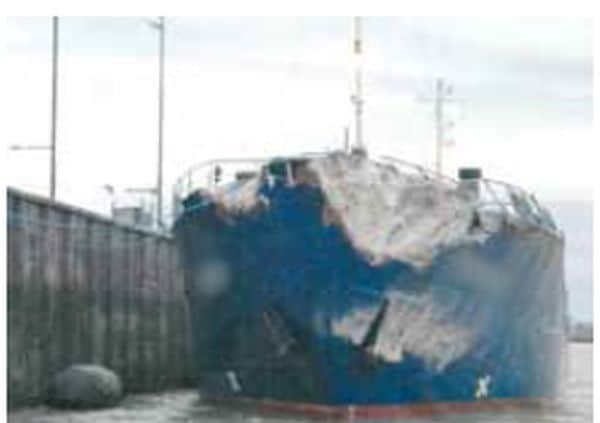 Next, the OOW set the engine control lever to STOP but the vessel was already very near two moored vessels on the port side. The vessel slid along the first moored vessel and then collided with the pier, between the first and second moored vessels, at about seven knots.

The OOW had neither sounded the general alarm nor attempted to have the rating let go the anchor before the collision. The Master arrived on the bridge at the moment of the collision with the pier. The starboard side of the vessel was severely dented and a small crack had formed level with the waterline. The Master sounded the general alarm and issued instructions for the two ratings to check inside the ship for damage.

Realising that it was not possible to control the rudder from the bridge, he went to the steering gear compartment where he switched to the backup rudder system, carried out a test, and found that the rudder now responded.

He then started the main engine and began to manoeuvre the ship astern and away from the pier. After the accident, a service company discovered that the contacts of the steering switch were loose and corroded. Accordingly, in addition to the primary means of steering, the backup means of steering also failed.