A bulk carrier was in port to load ‘raw, unwashed’ bauxite. Over the course of 13 days, loading took place intermittently due to heavy rain on some days, during which loading had to be stopped and the holds closed. The cargo declaration form supplied by the shipper indicated 10% moisture content for the bauxite. Because of the heavy rains, the Master had some concern over the moisture content, but he did not carry out any tests on board (can test) or ask for independent tests.

Once loaded, the vessel departed. Within a few days the weather deteriorated and the vessel’s speed had to be reduced.

Early one morning the general alarm was sounded and the Master made an announcement directing all crew to proceed to the bridge. The chief cook was making his way to the bridge when he met fellow crew members, who instructed him to proceed to the port-side lifeboat. As he made his way to the port-side lifeboat, the vessel suffered a blackout. Emergency lights came on, and the vessel stopped rolling and adopted a list of about 45 degrees to starboard. Now unable to reach the portside lifeboat station, the cook went outside, where he met the Master. Each wearing his lifejacket, they jumped into the sea. The two men stayed together while swimming away from the vessel. As they looked back from a safe distance, they saw the vessel had almost disappeared beneath the waves. From the time the general alarm had sounded until the foundering was about 20 minutes. 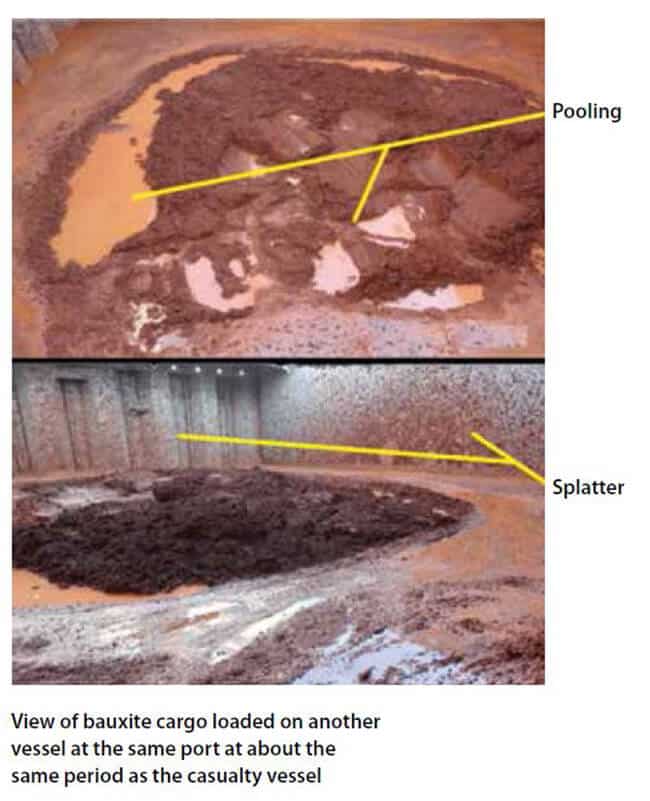 Later that day, the Master and cook were rescued, but only the cook was alive. Another deceased crew member was also recovered during subsequent SAR activities. None of the remaining 16 crew members was found and all are presumed dead.

Bauxite is listed within Appendix 1 to the IMSBC Code, but the individual schedule for bauxite contains no test requirements. The Statement of Facts declared by the Master and the agent acting on behalf of the charterers contained the comment: ‘Bauxite cargo transported by truck and stow at open quayside and wetted by the rain prior loading.’ Although all knew of the wet condition of the cargo, it is not known if they were aware of any risk involved if the moisture content was above that listed in the Individual Schedule for Bauxite within the Code. The Code is silent on risks due to high moisture content for Group C cargoes such as bauxite. It says nothing about the risk of liquefaction.

Irrespective of the cargo, if you see splatter on the sides of the hold or pooling water on the cargo (see photo) – beware! Have the cargo tested for moisture content and do not transport it if moisture is above the transportable moisture limit (TML).

Appendix 1 of the IMSBC Code describes bauxite as a cargo with:

If any of these properties are not met, there is a possibility that the bauxite can no longer be considered a Group C cargo but may well be similar to a Group A cargo, ie cargo that may liquefy. Notwithstanding Appendix 1 of the IMSBC Code, for the time being one should assume that any wet or moist cargo of bauxite containing an appreciable amount of fines is Group A unless testing has shown otherwise – even if the shippers have issued a cargo declaration stating the material to be Group C.