The failure of a weld ultimately led to a barge breaking loose from its mooring and heavily damaging a pier, the National Transportation Safety Board said in its Marine Accident Brief 20-35 issued Thursday.

On November 17, 2019, about 0904, the barge YD 71 contacted the James T. Wilson Fishing Pier in Hampton, Virginia, after breaking loose from its mooring. There were no people aboard the barge or on the pier at the time of the accident. The vessel was later extricated from under the pier and towed to a repair yard. No pollution or injuries were reported. Damage to the vessel was estimated at $38,000, and damage to the pier was estimated at $1,277,157. 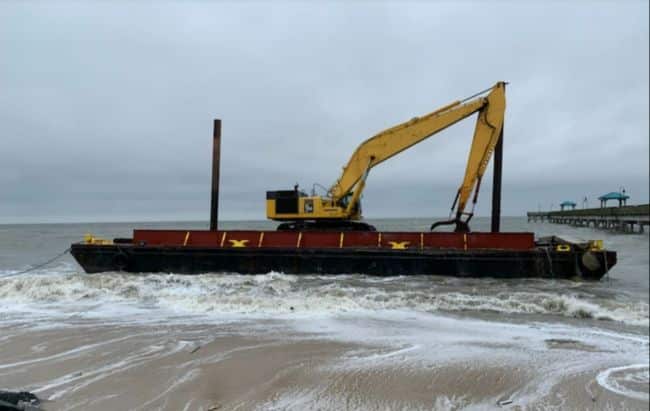 The YD 71 was a 100-foot-long, 45-foot-wide deck barge owned by Coastal Design & Construction Inc. and was used for marine construction. Both ends of the barge were raked, with spuds on the starboard side.

2 The barge had an excavator mounted on its deck to work as a dredge for a City of Hampton project at the Salt Ponds entrance jetty and dredging inside the estuary. The barge was secured on a mooring when not in use. Coastal Design & Construction Inc. owned three tugboats and several barges used in the marine construction industry. The tug Capt Dale and some of the barges were used on the Salt Ponds project.

The shoal waters offshore of Buckroe Beach are referred to as “the Horseshoe” and have a heavy concentration of fishing traps. A privately maintained channel runs through the traps to the Salt Ponds. 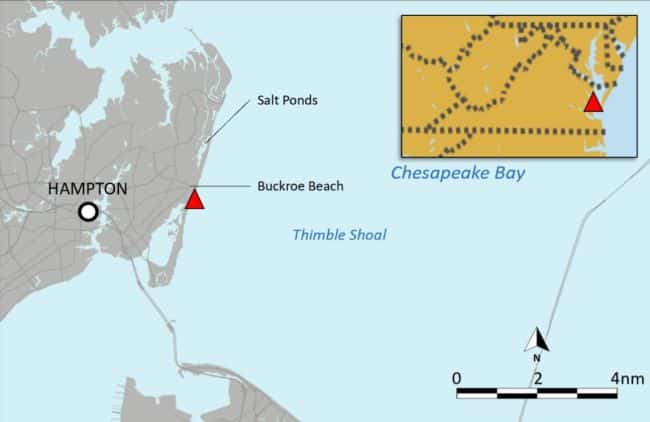 Coastal Design & Construction Inc. owned several moorings located approximately 800 feet offshore and just north and outside of the channel to the Salt Ponds. Each mooring consisted of a 4,500–5,000 pound anchor weight, 120 feet of 1.5-inch chain, and a mooring ball. Barges were moored to the bottom chain with a 60-foot-long, 1-inch cable pendant with a 4-foot eye. The eye was typically looped over the forward bitts on the barge. Additionally, each mooring had a 12-15 foot loop of chain, called a hurricane loop, that was shackled through one link of the bottom chain. The mooring was set in 9 to 10 feet of water, with a hard, sandy bottom, and a tidal range of 2.5 feet. The mooring pre-dated the construction project but was inspected and found satisfactory in August 2019 for this work. 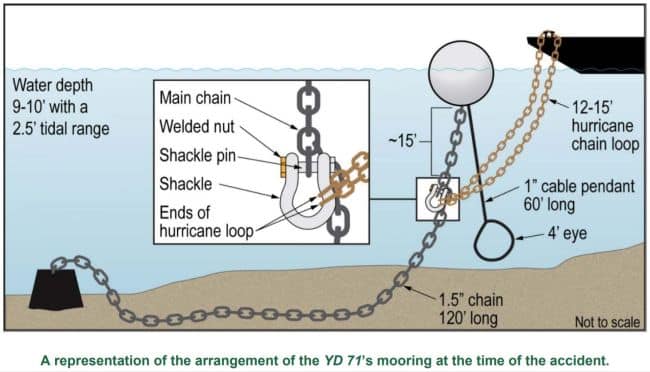 The hurricane loop was shackled to the bottom chain 15 feet below the mooring ball. The shackle’s crown was passed through each bitter end of the hurricane loop. The shackle pin was passed through a link at the bottom chain with the center stud removed and held in place with a nut. The nut was welded to the shackle pin, all the way around to keep it from backing out. 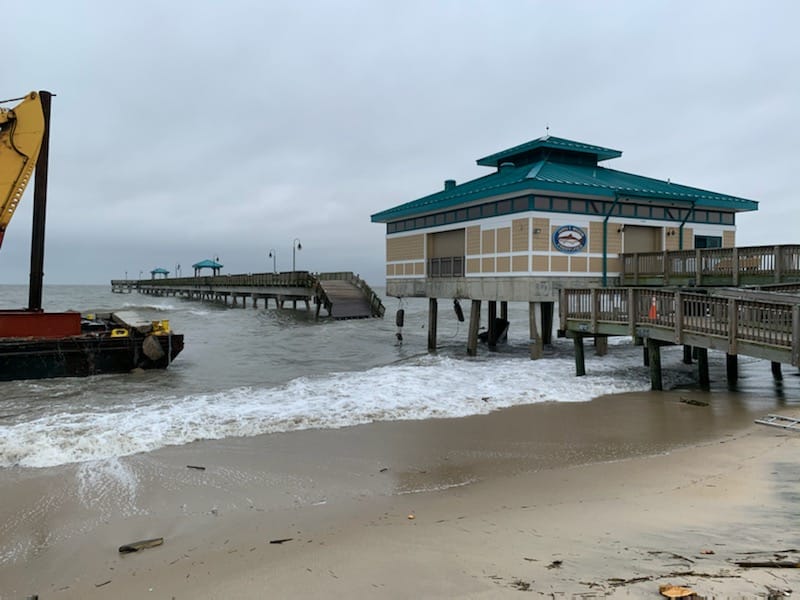 The 700-foot-long James T. Wilson Fishing Pier, formerly the Buckroe Fishing Pier, was built at a cost of $2.5 million and opened in 2009. It replaced a wooden pier that was destroyed by Hurricane Isabel in 2003. The pier was constructed of several 40-foot concrete spans, and, at the time of the accident, served recreational fishing and tourist traffic. The pier was normally open 24/7 but was closed on the evening of Saturday, November 16, due to weather.

At the end of the workday on Thursday, November 14, the crew of the attending towboat Capt Dale moored the YD 71 and two other barges. The crew discovered a kink in the mooring’s cable pendant, which was normally used to moor the barges. The captain of Capt Dale stated they then decided to use the mooring’s hurricane loop to moor the YD 71. The excavator operator used a grappling hook and the excavator aboard the YD 71 to retrieve the hurricane loop from below the surface and set it on one of the barge’s forward bitts, looping it two or three times in a figure-eight configuration. After the crew of Capt. Dale ensured the barge was secured to the mooring, they departed the site for the weekend.

The eight-page Marine Accident Brief 20-35 is available at https://go.usa.gov/x7Qjk.