You are here: Home › Videos › Watch: Where Did All Empty Cruise Ships Go Amidst COVID-19 Pandemic?
TwitterFacebookLinkedInPinterestBuffer

With COVID-19 impacting all sectors of the economy, the cruise industry has been particularly brought to its knees. The industry is now afloat on life support, literally.

Cruise ships became the first carriers/hot-spots of the deadly virus, with luxury yachts and mega cruises turning into large quarantine centres. Governments all around the world have imposed a strict ‘No Cruise’ ban, something that is likely to carry on throughout the rest of the year.

The sheer scale of this global shut down is unlike something the industry has ever witnessed, easily dwarfing global events like 9/11 or stock market crashes. 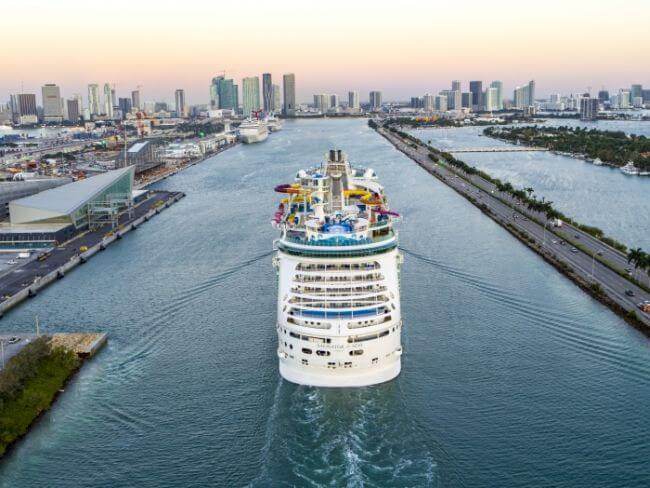 A multitude of cruise ships such as Ruby Princess, Diamond Princess and Artania saw large scale outbreaks onboard. But even though these are a few names, the vast majority of the cruise fleets around the world remained free from the outbreak.

Majority of the passengers disembarked on ports all around the world, and the ships were gradually emptied.

Now the question that arises in everyone’s mind is – Where did hundreds of these humongous cruise ships go? The answer might make you rethink about the situation of the industry.

Naturally, the first place cruise ships are supposed to go after emptying is – ports.

The UK’s Cruise Industry would be incomplete without mentioning the likes of Cunard, P&O and Saga. These cruise ships have given way to most of the non-essential crew members, keeping only essential officers like deck officers and engineers.

Southampton and Dover have seen cruise ships flocking in large numbers. While Queen Mary 2, Queen Victoria, and Britannia remain at Southampton, the likes of Aurora berthed at the latter.

The Isle of Wight harbour the Marella Cruise Ships in its anchorage.

Miami and Fort Lauderdale are one of the most important ports in the USA when it comes to cruising operations. Similarly, while traversing through these ports, you could see that they have turned into a beehive for most idle cruises.

Most of these clusters are happening around the Florida coastline, en route to the Caribbean islands.

The water off Grand Bahama is a beehive for all cruise-related activities, which has now turned into flocks for many major shipping lines- Carnival Cruises, Holland America, Norwegian Cruise Line and Royal Caribbean.

There are multiple little huddles scattered all over the Caribbean waters.

It is no secret that most cruise ships bear flags of Caribbean States, primarily because of tax incentives and labour laws. However, most of these countries are poor and can’t provide berths for large cruise ships in their ports. Also, using port facilities is a costly affair, and to dodge these, cruise ships have decided to anchor amidst the sea.

Therefore, these cruise ships are now anchored in the Manila Bay.

Most of these ships in the Manila Bay have been used to ferry Filipino crew members back home since the Philippines accounts for some 25% of the global seafaring workforce.

Find out more in the video: