The certificate of competency (COC) is a form of licence every mariner is granted to work on ships. The certificate ensures that the concerned person has the sufficient knowledge and skills to sail on ocean going vessels.

However, COC is not something that once awarded cannot be taken back, cancelled, or suspended. Its validity is directly proportional to the conduct and performance of a seafarer.

If the concerned authority is not satisfied or receives complain about any kind of wrongdoing by a seafarer, his or her COC can be cancelled or suspended for an indefinite period.

It is therefore important that every seafarer should know all the important points related to cancellation or suspension of the certificate of competency (COC). 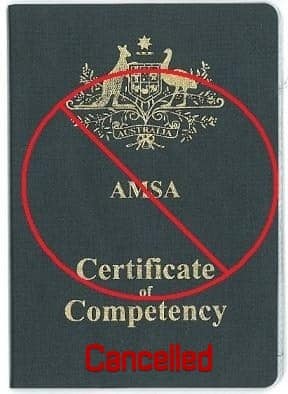 5 Reasons for cancellation or suspension of certificate of competency (COC)

1.       Incompetency: A seafarer’s COC can be suspended if any action resulting from incompetency has lead to a shipping accident involving injury, death of a person, or damage to ship’s property.

2.       Misconduct: If a seafarer is found guilty of acts of misconduct which has lead to any kind of damage to the ship (collision, stranding, or abandonment), the concerned person’s COC can be temporarily or permanently suspended until proper investigation is not carried out.

3.       Providing Misleading Information: COC of a seafarer can also be suspended if the person is found of intentionally providing misleading information which has lead to a shipping casualty, injury, or death of a person.

4.       Drunkenness: If a seafarer under the effect of alcohol has lead to a major shipping accident involving loss of life and property, his or her COC can be cancelled.

5.       Tyranny/Misbehaviour: In case a seafarer is found guilty of actions involving violence, misbehavior with fellow seafarers, or physical harassment which has lead to serious injury, death of a person or damage to the ship, his or her COC may be suspended or permanently cancelled.

However, it is to note that cancellation or suspension of a seafarer’s COC will be done only after proper investigation and inquiry has been made by the concerned authority.

An order for cancellation of COC will be passed only after the guilty person has been given a reasonable opportunity to provide an explanation for his or her wrongdoing. This can be done through an appropriate show cause notice.

A seafarer, whose COC has been cancelled or suspended can appeal to the concerned authority against such an order. This has to be done only within a certain number of days after the order of suspension of COC has been given (for e.g. in India it is 30 days).

A mariner should always keep a check on his actions while on ship and ensure that no action of his is resulting harmful to the ship or its crew members.