This is the question that has been going on in minds of people ever since the news of discovery of a ‘river under sea’ starting making rounds all over the place. According to this news, a group of divers have discovered an undersea river, complete with trees and leaves flowing on the sea bed. This undersea river has been discovered in Mexico, under the sea of Mexico. It’s been given name of ‘Cenote Angelita’ but is more famously known as river in sea.

According to Anatoly Beloshchin and his group of divers who were first ones to discover this phenomenon, this river under water is a complete river like any conventional one. It flows as much as 115 feet deep at some places, with flow of both fresh water and salty water at varying depths. Besides this single undersea river, other instances of river under water have been discovered by scientists all over the world. 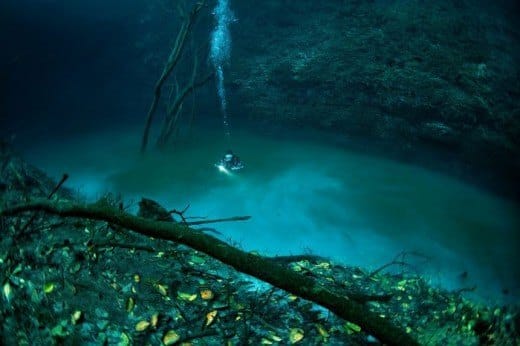 Another case of river under sea was discovered by team of Dr. Dan Parson of University of Leed at bottom of Black Sea. This undersea river is considered to be flowing with enough flow to count it as sixth largest rivers of the world when compared to its counterparts on the land. Believed to be more than hundred feet deep at certain places, this river can flow with a rate of four miles per hour and about 22,000 cubic meters of water passing through this particular channel.

These findings have made scientists all over the world to consider the possibility of existence of more such rivers under sea and on ocean beds. What was earlier considered as a miracle or maybe an instance of paranormal activity has now scientific explanations to make this process clearer. This makes one thing certain- rivers under the sea can exist scientifically.

The reason for formation of such rivers can be varied. Sometimes it stems from the bigger part of the sea underneath, and flows and carries a lot of sediments, which over the time convert it into a complete river like body of its own. The river in sea discovered by Dr. Parson and his team is believed to have been formed as a result of this phenomenon. Stemming from the salty water of Mediterranean Sea into the Black sea through the Bosphorus Strait, this undersea river carves a channel of its own which can run as much as 0.6 miles wide. The sediments carried by this flow make a river bed forming a separate structure.

Even in Mexico, there exists Cenote Angelita a very famous sea river. However, scientists believe a separate phenomenon for this finding. This undersea river is believed to be actually a bed of thick layer of hydrogen sulfide gas which is produced by bacteria of sea bed upon decomposition of organic matter. This is nothing like a real river in many terms as this is just a thick layer of foul smelling gas that curves and bends its path like a river would. However, the illusion it creates is of a river, even with river banks and foliage. This is enough to classify it as an undersea river, in opinion of many scientists.

Ever since news of such rivers under sea, scientists all over the world have been looking for more such examples. Many have been found and even more maybe discovered. However, this makes one thing clear- as much as we would like the mythological angle to it; a river under water is just as scientific as atoms and molecules.