The merchant navy uniform is a matter of great pride and respect for those working at sea. It takes years of hard work, discipline and dedication for a maritime professional to become worthy of wearing the prestigious merchant marine uniform.

These smart uniforms are also a matter of great fascination not just for those in the industry but also for those who have no clue what maritime professionals do or the industry is all about. For some, the uniform is not just two pieces of clothes, but an experience, an achievement, and an attachment to an industry which has made them what they are today.

It’s true to say that many youngsters dream of themselves in naval uniforms. However, one needs to work hard to earn that privilege.

Related Reading:  10 Reasons Why Career In Merchant Navy Is Unlike Any Other

The history of Merchant Navy uniform goes back to a recent past as the history of the title ‘Merchant Navy’. It is said that it was first granted by King George V on the British merchant shipping fleets in a bid to honour their service in the First World War.

Similarly, the idea of a particular uniform for the seafarers working on merchant vessels was introduced in the twentieth century, especially after the first world war. The naval forces, like other military forces, across the world, had already introduced uniforms a long time ago. The offices and other crew members abroad a merchant’s vessel were allowed to choose their clothes according to their choices. Historians suggest that the work clothes of seafarers in the commercial vessels were not greatly different from those worn by peasants and other working class people.

The uniforms became part of the culture of merchant navy after the passenger ships introduced systems of stripes and badges to identify its crew members from travellers. The system also helped to identify officers from other crewmembers such as seamen or ratings. The successful implementation of this system abroad the passenger ships attracted the attention of merchant ship owners in Britain and other major countries in Europe. According to historical documents, there was no official uniform for merchant navy until 1918 when the British Board of Trade introduced it for the first time. According to the Royal Museums Greenwich, most of the merchant uniforms in the museum collection date from the 20th century, including the standard uniform introduced in 1918.

Apart from helping to identify the ranks of seafarers, the uniforms also talked about the responsibilities of a crew member and brought more discipline into their job. The shining epaulettes on the shoulders reflected the responsibilities performed at different times and other achievements of a seafarer.

Though the culture of uniform abroad the commercial vessels continued until 1970’s, the later years witnessed people moving away from such formal characteristics, especially in the case of merchant vessels. While the crew working abroad passenger vessels continued to be dressed up in their uniforms, the other commercial vessels focussed more on operational capabilities making other sophisticated cments optional.

At the same time, Merchant Navy cap badges were also issued in Britain. In terms of Insignia, the uniforms with full golden stripes are meant for deck officers, while engineer officers will have golden stripes with purple colour in between on their uniforms. The gold stripes with green colour and red colour are being used on the uniforms of electrical officers and medical officers, respectively. The electrical officer wears the same stripe as that of a 3rd engineer or 2nd officer. The crew working as the chief steward or in the hospitality department will have golden stripes with white colour. The uniform with wavy stripes and a diamond in between are for radio officers abroad the vessels. At the same time, the merchant navy uniforms that features stripes with diamond can only be used by Officers having the certificate of competency (COC). However, the features on the merchant navy dress display slight differences from country to country.

Similarly, the colours used between the stripes on the uniform also act as an element to differentiate the crew members according to their occupational hierarchy on board the vessel. Known as Merchant Navy Insignia, these designs were first issued for the merchant navy in the 1940s by Admiralty, Britain.

Currently, seafarers abroad commercial vessels, especially while working in the engine room or on deck,  use boiler suits as a more usual uniform, while mariners working as bridge watchkeepers and masters prefer a simple white pilot shirt and black trousers.

Since the introduction of uniforms for merchant navy, more strictly for crew members abroad the passenger vessels, it has helped the shipping companies to enhance their operation. In addition to helping identify the crew members from the passengers, the use of uniforms also helped the crew to develop a unity as well as solidarity among themselves and professionalism abroad the vessel, leading to an improved service delivery. 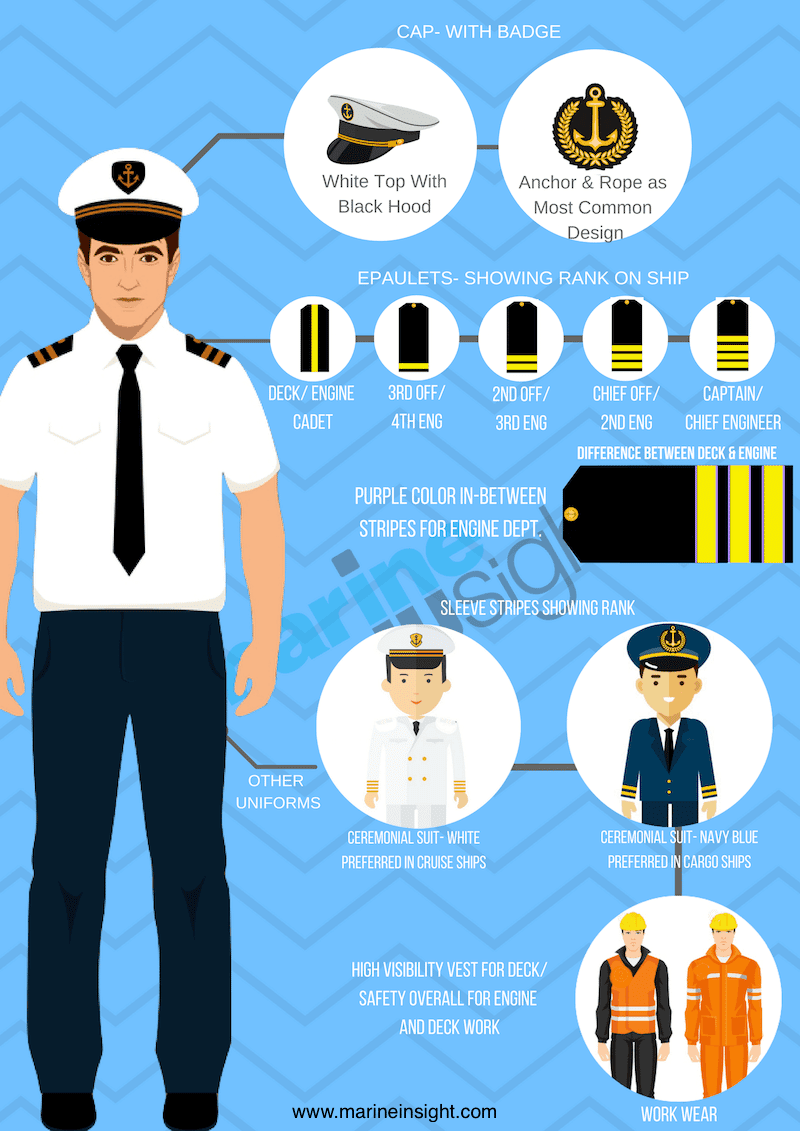 What a maritime professional wears on board ships also depend on the type of the vessel and the nature of work he/she performs. For e.g. as mentioned earlier a mariner working on deck or engine room will wear boiler suits along with high visibility vest or safety accessories such as gloves, helmet, safety shoes etc. Officer uniform on a cruise ship might differ a bit as compared to those worn on merchant vessels.

Like any other uniforms being used across different workplaces, the merchant navy uniforms also carries specifications that explained the person who wears it. It helps to create a professional identity and demonstrated occupational hierarchies among the crew members. While the elements of a merchant navy’s uniform resembled many of the features of a naval uniform, they all often carried different meanings along with.  Though modern days’ seafarers use more trendy uniforms, some features of the older versions of the merchant navy uniform remained similar all these years. 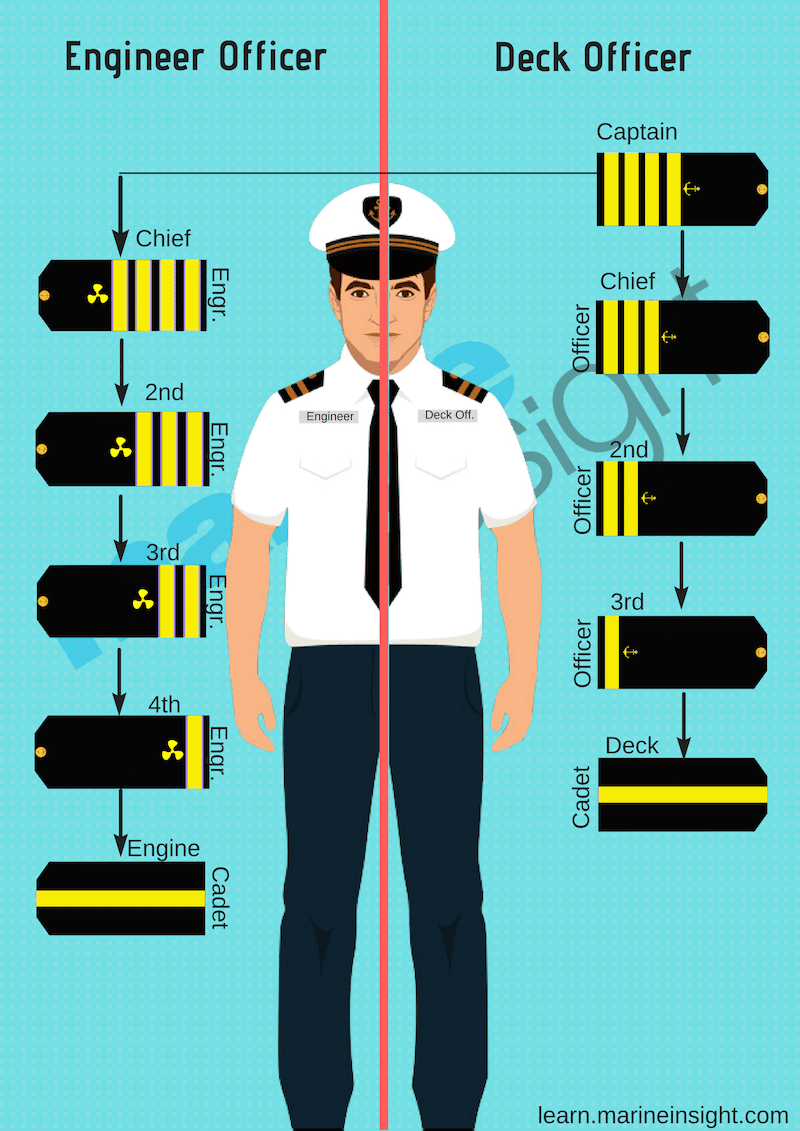 Deck crew (and officers) usually wear a white shirt and black trousers with epaulettes according to their rank when on ship’s bridge, accommodation, or mess area. The uniform is accompanied with black formal shoes and a pullover or sweatshirt during cold condition. The cap (P-cap) is a black hood with a white top having an anchor symbol.

While working on deck or during cargo operations, they can be usually seen wearing a boiler suit along with other personal protective equipment. Ratings from the deck department also wear the same boiler suit and safety shoes.

As engine department crew has to spend most of the time in the engine room, they are therefore always in boiler suits, except when they are in the officer’s mess or on the bridge. (Though during lunch hours, they can be allowed to have food in boiler suit because of time constraint.)

As being practised across all other workplaces, the crew abroad the commercial vessels as allotted separate uniforms according to their ranks. The uniform of commercial vessel’s crew members sometimes also display the company cap badge and other badges that are popular in use.

Today, the uniform and other dress codes that merchant navy officers follow have changed immensely. The uniforms’ design has improved much and of course, the fascination of youth to be part of that community has also increased in a noticeable level.

Do you love your merchant navy uniform?