You are here: Home › Videos › Video: Why Is The Command Centre Of A Ship Called “Bridge”?
TwitterFacebookLinkedInPinterestBuffer

Did you ever stop and wonder why a ship’s bridge is named so? i.e. a Bridge.

The reason, however, maybe unravelled through the pages of navigation history, taking us to the very origins of human sailing and shipbuilding.

After centuries of modifications on deck designs, the bridge has now emerged as the command centre of the ship.

On a normal voyage, manning of the bridge is usually done by an officer of the watch, with a lookout. The captain remains on the bridge during the important manoeuvres, assisted by a pilot and other navigational officers. 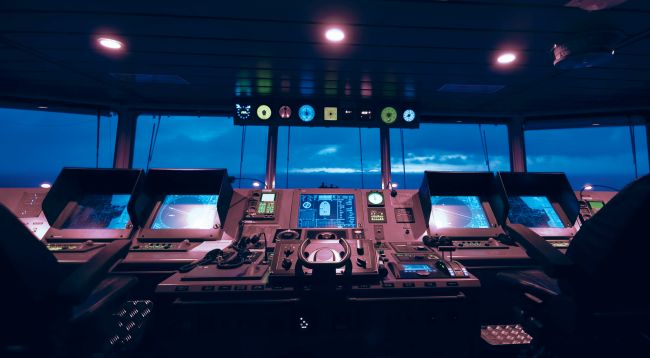 However, during the early days of sailing, cockpits used to be a lot smaller, with the ship steering being controlled by a rudder. The cockswain was usually in charge of operations using the tiller, which was connected to the rudder.

With technological advancement in ship designs, tillers were gradually replaced with wheels. Wheels used to control the ship direction using ropes and pulleys, placed at some distance from the ship’s stern, enabling the navigational officer to have a clear look of the navigational waters when placed at the quarter deck.

The quarter deck was raised to enable the captain to give direct orders to the crew. This feature proved to be an extremely important tool for navigation, especially during a storm.

With an increase in ship sizes, net tonnage also saw its increment. This in turn, also resulted in the workforce of the ship to be increased considerably.

The wheel was housed in a small structure on the quarter-deck, in the aft end of the ship. It became known as the wheelhouse. This wheelhouse has now been added to a modern ship’s bridge, forming an integral part of the same.

Coming back to history, we do know that advancement in steam engines marked the end of the human need for wind energy. Steam engines replaced sails on board ships, with sail paddles taking its place. They were steered via a rudder wheel.

However, we must remember that steam paddles were enormous in size, rising to a considerable height above the deck. Also, there was the issue as to where the wheelhouse would be placed on board since there was no raised platform from where the captain could give direction to the navigational officers.

One might think that the captain could’ve just climbed up on one of the two enormous steam paddles and issued commands to the navigational officer, but the engineering team needed it for close inspection of the paddles.

For this purpose, a walkaway was constructed on a raised platform, connecting the two paddles, serving as a literal ‘bridge’, earning the command centre its name. Yes, the name has survived till date.

With the advent of technological advancements, propellers replaced the steam paddles, but naval coinage kept the term ‘bridge’ alive.

It is an interesting fact however that unlike merchant vessels, major warships have a number of bridges, including a navigational bridge, an admiralty bridge, and a conning tower in old warships.

Watch the video to understand more.

Bridge of a Ship – Design And Layout

Video: An Inside Look How Quantum Of The Seas Navigates Across The Atlantic