The Mary Maersk docked in the port of Antwerp in October. With a length of 399 metres, beam of 59 metres and capacity of 18,000 TEU this Triple E-class vessel is the newest and largest container carrier in the world. According to her master the call was “smooth and problem-free,” setting a new milestone for the port of Antwerp.

The Mary Maersk was soon followed by the 15,500 TEU Evelyn Maersk in the Deurganck dock, with a length of 398 metres and a beam of 56.5 metres. Vessels of 13,000 TEU and over have been calling at the MSC hub in the Delwaide dock ever since the first visit by the MSC Beatrice in 2009.

The fact that Antwerp is a safe and efficient port in all conditions was demonstrated by the recent storm, when the Emma Maersk (15,500 TEU) left the port in a force 7 gale. The SWATH pilot ships used by the Flemish pilotage service also demonstrated their worth: they continued operating even in force 10 storm winds, piloting the seagoing ships from the Wandelaar pilot pickup point. 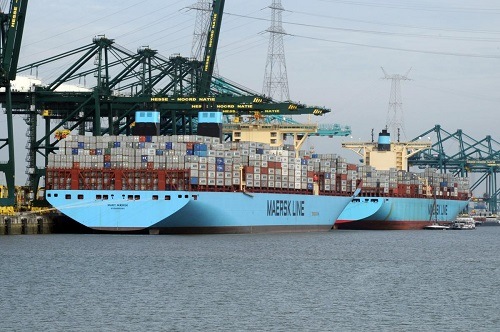 This is the best proof that even the very largest container carriers are able to call at Antwerp without problem. It is also a solid achievement that backs up the port’s new branding campaign: “Everything is possible.” “We are always able to take fully laden ships from the Far East as their first port of call,” declared Jacques D’Havé, administrator-general of the Agency for Maritime Services & Coast.

The arrival of these container carriers followed just a few days after the launch of the P3 Network, an alliance of the three largest container shipping companies in the world, which has opted resolutely for Antwerp as its European platform. This once more confirms the importance of the recent deepening of the river Scheldt.

The number of calls by ultra-large container ships (ULCS) has been rising sharply in the past few years. Already in the first nine months of this year 90 units of 13,000 TEU or more have put into the port, compared with 69 in the same period last year.