You are here: Home › Videos › Watch: WinGD Builds The Most Powerful Otto Cycle Engine In The World
TwitterFacebookLinkedInPinterestBuffer

WinGD has released a time-lapse video of the build of a 12X92DF engine, built by CSSC-MES Diesel Co., Ltd. (CMD) in Lingang, Shanghai. This twelve-cylinder version of the 92cm bore X-DF dual-fuel engine from WinGD, is set to be the largest and most powerful Otto cycle gas and dual-fuel engine ever built and will bring a new level of environmental sustainability to the containership segment. 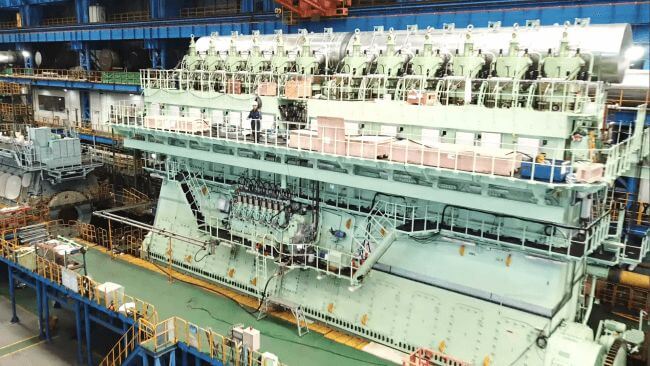 The engine build has taken approximately 3,125 person-days, which totals to 25,000-man hours. The engine weighs over 2,100 tons and has received parts from more than 15 countries. *

Rated 63,840 kW at 80 rpm, the 12X92DF engine is the largest and most powerful gas and dual-fuel engine ever built. WinGD’s low-pressure dual-fuel technology enables stable combustion, high fuel efficiency and low noxious and greenhouse gas emissions typical of lean burn gas combustion. X-DF engines comply with IMO Tier III limits on NOx in gas mode and IMO Tier II in liquid fuel mode, both without EGR or SCR. With WinGD’s X-DF engines and LNG as fuel, compliance is guaranteed with the upcoming emissions regulations due to the low NOx and SOx emissions from burning LNG in the X-DF engine.

Since the launch of the X-DF engine series in 2013, the technology has proven reliable, efficient and environmentally sustainable through over 280,000 running hours on 265 engines in operation and/or on order.