The pallets stacked with plastic-wrapped bricks of cocaine, unloaded by the crew of the cutter USCGC Stratton (WMSL-752) on Thursday, represented just some of the more than 47,000 pounds intercepted in the eastern Pacific just in recent months, according to federal officials. The estimated street value: $721 million.The cocaine stash was collected during 23 separate interdictions by U.S. and Canadian forces during operations off Central America and South America, Coast Guard Pacific Area officials announced. The counter-drug operations are part of the continuing mission to stop the flow of illegal drugs into the United States from drug-producing regions to the south, officials said on Thursday. 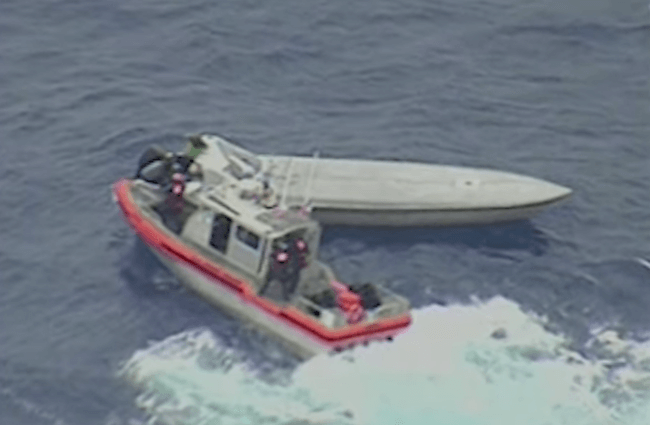 While the Coast Guard is seeing record-breaking interdictions at sea, recent counter-drug operations reveal a new tactic and trend in how drug cartels are transporting the drugs close to shore. Since June, law enforcement teams and vessels have captured 13 stealthy, “low-profile” fast boats that officials said are designed to evade radar and the eyes of Coast Guard and law enforcement teams.

“These drugs will not make it to the Main Streets of America, which is a victory in one sense,” Vice Adm. Fred Midgette, the Coast Guard’s Pacific Area commander, said at a Thursday press conference.
“Yet as we view that threat through a wider lens, we see that the scourge of drugs remains a challenge to our nations, and in fact all nations across the globe, and especially here in the Western Hemisphere.”

The Coast Guard turned over the drugs to U.S. officials for additional investigation and likely prosecutions, several of which are already taking place in San Diego.

Photographs and video of at-sea interdictions released by officials show slim boats with multiple engines and painted in muted greens, purportedly to blend in better at sea. In one incident, Stratton’s crew nabbed a low-slung, cigarette-shaped boat in international waters on Dec. 30, along with more than 3,400 pounds of cocaine and four suspected smugglers.

Over a three-day period, crew members of the Alameda, Calif.-based Stratton stopped two such boats packed with $78-million worth of cocaine, according to the Coast Guard Pacific Area officials. That was among more than 12,000 pounds of cocaine, valued at more than $165 million, they interdicted from five suspected drug-smuggling vessels over a two-month period.