You are here: Home › Videos › Watch: Ship Runs Aground, Italian Coast Guard To The Rescue
TwitterFacebookLinkedInPinterestBuffer

On 21st December, evening the motor ship CDRY BLUE, a 108 m long merchant ship flying the Italian flag from Cagliari and heading for Alicante, ran aground on the south-west coast of Sardinia and more precisely in Torre Cannai Municipality of Sant’Antioco.

Under the coordination of the Maritime Directorate of Cagliari, the Coast Guard air and naval vessels were immediately sent to the scene: two patrol boats specialized in search and rescue and a NEMO helicopter in force at the 4th Helicopter Section of the Coast Guard of Decimomannu.

However, due to poor visibility and prohibitive weather conditions – with gusts of wind up to 50 knots – it was not possible to recover the 12 crew members on board during the night, despite the fact that an additional Air Force helicopter was it has also been used in operations. 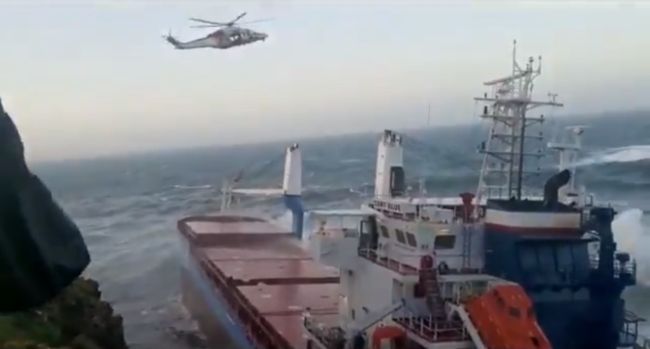 At the first light of dawn – despite the persisting bad weather conditions – the NEMO helicopter of the Coast Guard managed to rescue all the seafarers present on board with three successive sorties, transporting them to a square adjacent to the Office Circondariale Marittimo di Sant’Antioco, for the occasion equipped as a collection and assistance point. There the castaways were assisted by 118, Regional Civil Protection and Fire Brigade personnel, as well as by Coast Guard personnel.

At the moment, through a tug that left the port of Cagliari and patrols from the ground of the local Maritime District Office, the ship’s monitoring activities continue to be monitored on the spot to check its stability and any oil spills.

All operations are constantly monitored and monitored by the Coast Guard General Command Operations Center.