Despite gunshots being fired at its drone again, conservation group Sea Shepherd, together with the Mexican Navy, drove poachers off the protected vaquita refuge and saved the life of an endangered totoaba fish from their illegal nets. This was the second shoot-out, and the first in daylight, directed at Sea Shepherd in the Upper Gulf of California, Mexico, in less than a week.

The first incident, which occurred on Christmas Eve, poachers shot down the conservationists’ night vision drone. The NGO is currently in the area for Operation Milagro IV, where it is actively protecting the totoaba bass and the near-extinct vaquita porpoise. 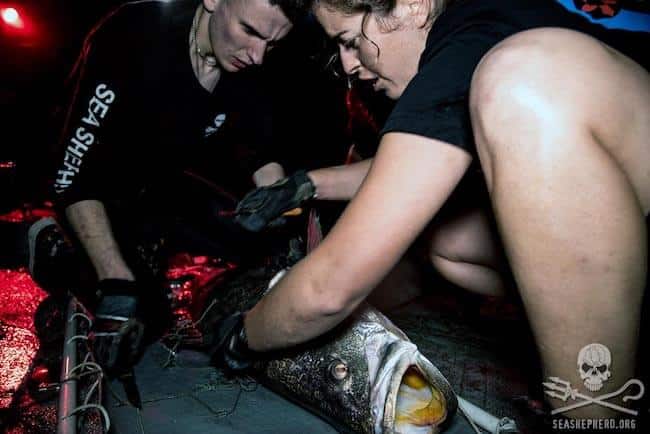 On December 30th, 2017, the Sea Shepherd vessel, M/V John Paul DeJoria, was patrolling for poachers and gillnets within the vaquita refuge. At 15:30, the crew identified a poaching skiff through binoculars, visibly pulling up a net less than one nautical mile away.

Even though its night drone was shot down by an automatic rifle six days earlier, Sea Shepherd still sent another drone to investigate the poacher’s activity from above. The drone team quickly confirmed the crew’s initial assessment: poachers were pulling out a gillnet in the middle of the vaquita refuge in broad daylight.

Poachers are targeting the critically endangered totoaba fish to sell its swim bladder on the black market in China and Hong Kong for unproven medicinal properties. One swim bladder can collect more than U$20,000. For that reason, the fish is commonly referred to as “aquatic cocaine.”

Poachers may set these gillnets to catch one species, but the nets don’t discriminate, catching all that swims in these waters including the most endangered marine mammal in the world – the vaquita porpoise.

With clear skies overhead, it didn’t take long for the poachers to spot the drone above them. The Sea Shepherd crew heard six gunshots from the bow of the marine conservation’s vessel. When drone operator Jack Hutton saw the poachers pull the net into their skiff before taking off, he made the decision to fly the drone back to the ship. Footage from the incident shows that one of the individuals in the skiff had a handgun and used it.

Captain Benoit Sandjian informed the Mexican Navy of the situation and they arrived shortly on the scene. After checking that the Sea Shepherd vessel was safe, the Navy began to pursue the poachers’ skiff.

In the meantime, the M/V John Paul DeJoria headed towards the location coordinates where the poachers briefly stopped during their escape. Once there, the crew discovered a totoaba net with a live adult totoaba, struggling for its life.

Within an hour, the illegal net was fully recovered on the bow of the Sea Shepherd ship, with the totoaba disentangled and set free by the volunteer crew.

Without Sea Shepherd’s intervention, the trapped totoaba would have been a lucrative catch for poachers, and a significant loss for this critically endangered species.

“This developing sequence of events makes it appear as though poachers are now carrying firearms in the Upper Gulf of California,” said Captain Benoit. “They are not hesitating to make use of them, in close proximity to our vessel, be it day or night. Sea Shepherd has been facing threats from poachers over the last few years during Operation Milagro but we are now observing a new level of violence in this area”.

Despite the difficulties to protect the vaquita porpoise and totoaba fish, Mexican authorities continue to take a strong stance on conservation. With less than 30 vaquita in existence, the Mexican government has showed the world they are not willing to let this species go extinct, and are working with various groups, including partnering with Sea Shepherd to remove illegal gillnets and patrol for poachers.

Sea Shepherd currently has two vessels in the area, with a third on the way.