Royal IHC has successfully named and launched the 550t top tension capacity pipelay vessel, SEVEN CRUZEIRO, at its shipyard in Krimpen aan den IJssel. This is the final pipelaying vessel in a series of three ordered by Subsea 7, and the naming ceremony was performed by Mrs Sally Rosa, wife of Mr Ricardo Rosa, Chief Financial Officer, Subsea 7.

In addition, the SEVEN SUN, launched on 19 December 2014 in Kinderdijk and the second vessel of this series, was officially named today by Mrs Lilian Camozzato, wife of Mr Guilherme Camozzato, Director of Operations, Subsea 7 Brazil. 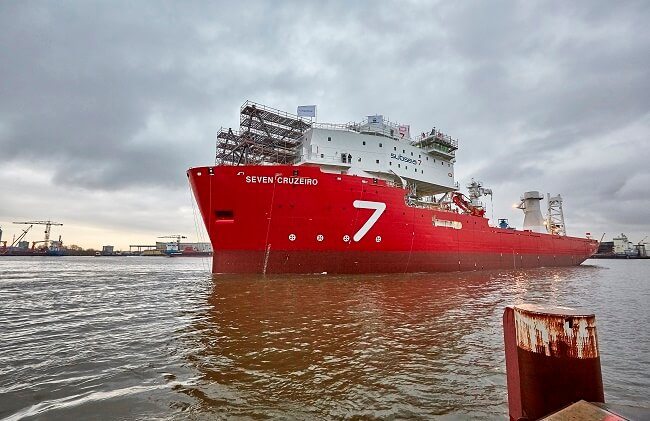 Both are dynamically positioned pipelay vessels capable of operating in water depths of up to 3,000m and suitable for operations worldwide. Designed by IHC in close collaboration with Subsea 7, each vessel is fitted with two under-deck storage carousels with a capacity for 2,500t and 1,500t of product respectively.

A vertical (tiltable) lay system with a 550t top tension capacity is permanently installed for the deployment of a range of flexible products with a diameter of 50-650mm. The lay tower can operate at up to 10° from the vertical and is fitted with two wire centralizers and with two tensioners, each with a 275t capacity, that can be retracted clear of the firing line. The pipelaying systems are delivered by Huisman.

“Over the years we have worked closely together with Subsea 7 on a total of eight vessels,” says Arjan Klijnsoon, IHC’s Executive Director Shipbuilding. “IHC is proud of its long-standing relationship with Subsea 7 and the confidence they have in our ability to deliver high-quality vessels on time.”