The RNLI volunteers from both Kyle of Lochalsh and Mallaig were paged at 7:34 am Sunday 18th February, to assist the 1200 tonne cargo vessel ‘CEG Universe’ which was disabled with a broken rudder in the Kylerhea narrows

Kyle lifeboat Spirit of Fred. Olsen launched at 7:44 am and made the best speed towards the 65-metre vessel, which was using its anchor to try and hold a position in the very strong tidal currents through the narrows. The lifeboat arrived on scene at 7:53 am and put crew members aboard the stricken vessel to assess the situation, whilst awaiting the arrival of the larger Mallaig Severn class lifeboat. 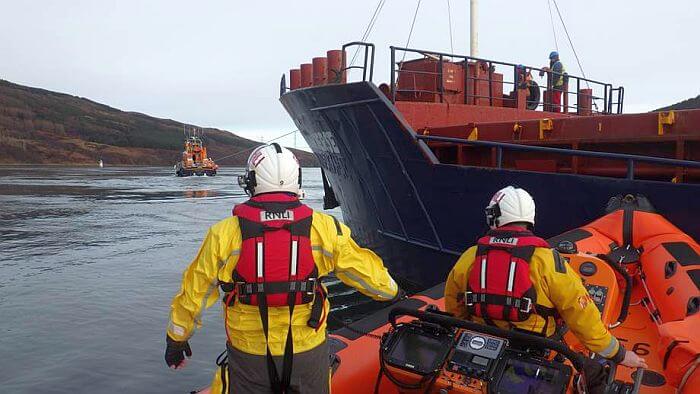 Due to the 8 knots of the tide which runs through the channel, and the fact that the cargo vessel’s rudder was jammed full to port, it was decided to wait for a tug to assist with the tow. Whilst awaiting the arrival of the SD Kyle of Lochalsh from the BUTEC base in Kyle, the casualty vessel’s anchor brake failed and the vessel began to drift backwards. Mallaig and Kyle lifeboats took the cargo vessel under tow and held it against the current until the tug arrived on scene at 10:15 am. 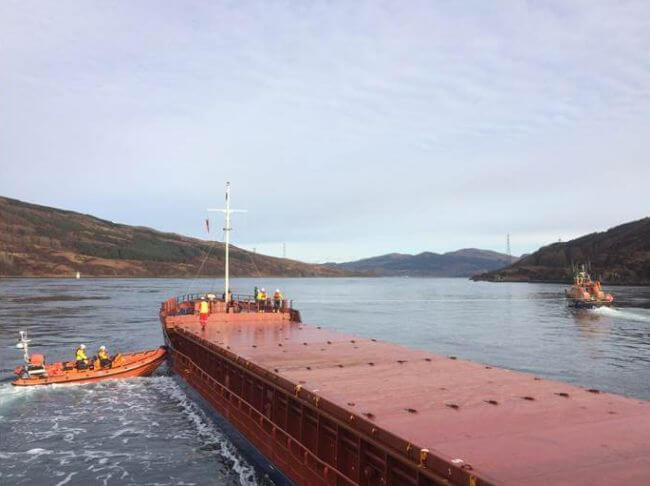 The SD Kyle of Lochalsh and the two lifeboats then manoeuvred the cargo vessel through the Narrows and towed it into Kyle Harbour at 12:10 pm. The lifeboats were then stood down and Kyle lifeboat returned to the station to be refuelled and made ready for service. 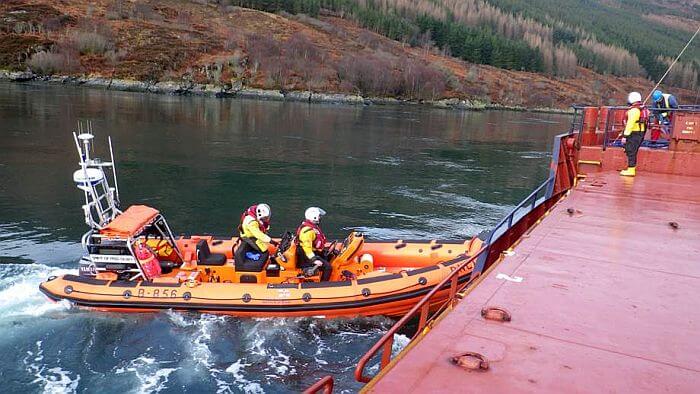 Key facts about the RNLI

The Royal National Lifeboat Institution is the charity that saves lives at sea. Our volunteers provide a 24-hour search and rescue service in the United Kingdom and Ireland from 238 lifeboat stations, including four along the River Thames and inland lifeboat stations at Loch Ness, Lough Derg, Enniskillen and Lough Ree. Additionally, the RNLI has more than 1,000 lifeguards on over 240 beaches around the UK and operates a specialist flood rescue team, which can respond anywhere across the UK and Ireland when inland flooding puts lives at risk.

The RNLI relies on public donations and legacies to maintain its rescue service. As a charity, it is separate from but works alongside government-controlled and funded coastguard services. Since the RNLI was founded in 1824 our lifeboat crews and lifeguards have saved at least 140,000 lives. Volunteers make up 95% of the charity, including 4,600 volunteer lifeboat crew members and 3,000 volunteer shore crew. Additionally, tens of thousands of other dedicated volunteers raise funds and awareness, give safety advice, and help in our museums, shops and offices.

Watch: Investigation Of The Sinking Of US Cargo Vessel EI Faro