Receiving over 8,000 ships a year and with a throughput of 36 million tonnes, Dublin is Ireland’s premier port, handling almost 50% of all trade in the Republic of Ireland. On 20 April 2018, the latest generation in roll on/roll off (RoRo) super ferries, the MV Celine, was christened and welcomed to the port prior to becoming a regular visitor as part of its weekly schedule. Even before the Celine was built, Dublin Port’s Pilots and Ship Masters had been preparing for its arrival by taking part in simulator familiarisation and training at HR Wallingford’s UK Ship Simulation Centre. 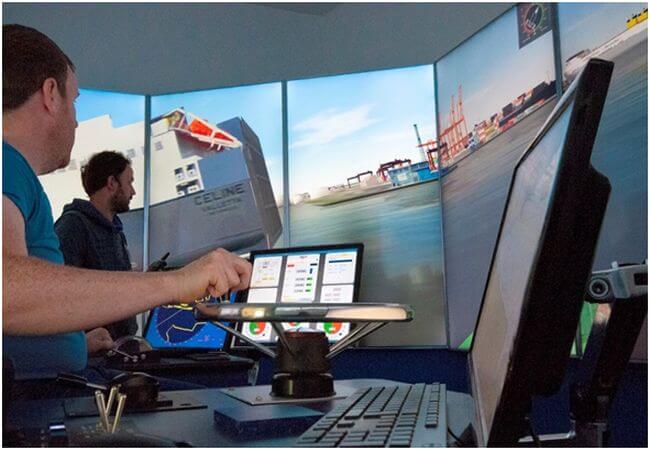 The MV Celine – LNG ready to allow for future running on gas – is the newest vessel to join the shipping line, CompagnieLuxembourgeoised’Navigation (CLdN), which specialises in short sea RoRo cargo. At 234m in length – longer than two football pitches – it is the largest short sea roll-on/roll-off vessel in the world. With a capacity of 8,000 lane-metres, it represents the next generation of super ferries servicing Dublin Port, providing additional capacity for customers trading with Continental Europe via the ports of Zeebrugge and Rotterdam.

HR Wallingford previously worked closely with CLdN to create an accurate hydrodynamic model of the Celine prior to the ship build being completed. Ship Masters and Maritime Pilots then carried out simulation-based familiarisation sessions using one of the ship simulators at HR Wallingford’s UK Ship Simulation Centre, with Tug Masters working alongside in integrated tug simulators. This was used to determine how the ship would handle in comparison to other large RoRo ships, and to identify the limits within which the new vessel could be manoeuvred safely in the busy Dublin Port environment, where it would pass adjacent berths with other large moored vessels, such as cruise ships.

Capt. Michael McKenna, Harbour Master at Dublin Port, said: “Our Pilots and Tug Masters already have a lot of experience in handling large vessels such as the Celine. When manoeuvring such a ship, varying weather conditions, particularly wind speed and wind direction, can have a dramatic effect on how the vessel handles. The simulator training at HR Wallingford has been particularly useful for rehearsing certain manoeuvres jointly between the Pilots, Tug Masters and Celine’s Captains. This has enabled us to identify the safe parameters for manoeuvring the Celine into and out of port, under a variety of conditions.”

Dr Mark McBride, HR Wallingford’s Ships Group Manager, said: “At the UK Ship Simulation Centre, we have developed accurate ship manoeuvring models to simulate close quarters operations, with the Pilots and Tug Masters using integrated, real-time, ship and tug simulators for their continued training and development. This level of precision enables us to continue to provide the highest level of service to satisfy the demanding requirements of the shipping industry.”

HR Wallingford has developed its own ship and tug simulation system, which uses sophisticated techniques to represent the spatial and temporal behaviour of a ship or tug. The hydrodynamic modelling includes full six degree-of-freedom response to waves, wind and currents, allowing for both lift and drag effects and close quarter effects such as shallow water, bank effects, bow and stern thrusters, ship interaction and collisions.

CLdN, which operates 25 Ro-Ro vessels, is deploying Celine on the company’s North Sea routes with regular calls to Dublin directly from Zeebrugge.

Watch a short video of extracts from the simulator familiarisation and training at the UK Ship Simulation Centre, together with actual drone footage of the Celine arriving at Dublin Port.


Press Release: HR Wallingford
Report an Error
Want to share your tips and advice? Got questions? Visit the community forum to ask questions, get answers, meet people, and share your tips!