Subsea 7 selected IHC for the construction of this vessel because of its strong track record in vessel delivery and quality of service. The Seven Rio is the second of four vessels in total ordered specifically for operation in Brazilian waters. When delivered in 2016, the Seven Cruzeiro and Seven Sun will complete the fleet of pipelaying vessels that will be working under contract for Petrobras in Brazil. 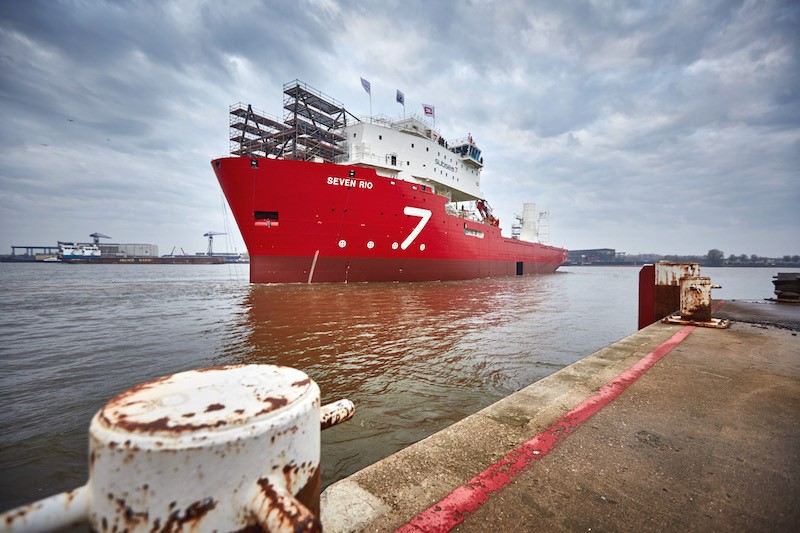 The Seven Rio has an overall length of 146 metres, a beam of 30 metres and a Class-2 dynamic positioning system. The vessel is equipped with a vertical (tiltable) lay system – with a 550t top tension capacity – and twin ROVs. She is fitted with two under-deck storage carousels, with a capacity for 2,500t and 1,500t of product respectively. The construction of the Seven Rio is comfortably on schedule.

“The launch of the Seven Rio is yet another milestone in the long and successful cooperation between Subsea 7 and IHC,” said Arjan Klijnsoon, Managing Director of IHC’s Offshore division. “We are proud to be providing Subsea 7 with another pipelaying vessel to join its sister vessel, the Seven Waves, in Brazilian waters.”

“We are honoured that Mrs Lara officiated at the naming ceremony of the Seven Rio and we look forward to this new vessel joining the Seven Waves on operational contracts for Petrobras in Brazil.” said Rachid Felix, Vice President – Commercial, Subsea 7 Brazil.